After being thoroughly outplayed and outmached on Sunday, the Moose had an opportunity to redeem themselves against the Red Wings’ AHL affiliate, the Grand Rapids Griffins. Prior to the game, most of the questions revolved around the Moose’s talented rookie, Nic Petan, who was a healthy scratch for Tuesday night’s game.  Coach McCambridge in his post-game comments addressed this question and revealed that it was due to Petan being late for today’s game day skate. 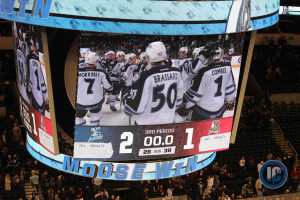 Midway through the first, Austen Brassard hit not one, but two posts on the same shift – in one case, Scott Kosmachuk fed him as he entered the zone, and Brassard sniped the left post from the slot; in the other case, Josh Morrissey took a slapper, and Brassard collected the rebound and put it off the crossbar.

The Moose were able to draw another penalty, and on the 5-on-3, J.C Lipon made a great pass, finding Chase De Leo back-door, who tipped it into the top of the net, putting the Moose up 1-0.

After the first period, shots were 13-9 in favour of the Moose

For the second time in the game, the Moose lost a great scoring opportunity when a fight broke out – this time, it was high-end Wings’ prospect Anthony Mantha against Josh Morrissey, who was facing retribution from the Griffins after injuring Ouellet on that big open-ice hit.

With Patrice Cormier stuck on defence, Jeff Hoggan took a pass off the wall and walked around the Moose forward, and made a nice deke on Comrie, but the Moose goalie was equal to the task with a great, sliding right-pad save.

After the Moose and Griffins traded penalties, the Moose took an extra one and went down 4-on-3; shorthanded, the pk grouping of Cormier, MacWilliam and Melchiori gave the Griffins all kinds of time and space, and Eric Tangradi ended up all alone, collected a rebound, and put it five hole on a sprawled Eric Comrie, tying the game at 1.

The Moose were lucky to be tied 1-1 after 2, after putting forth a weak effort in the second, being outshot 12-3

With 9 minutes left in the third, the line of Albert, Halischuk and Cormier had a great shift in the Griffins’ zone – Matt Halischuk controlled the puck nicely, cycled to John Albert, who drove towards the net and fed a quick pass to Patrice Cormier, who tapped it by Jared Coreau to put the Moose up 2-1.

With 5 minutes to play, Eric Comrie made an incredible, game-saving stop with his glove, moving swiftly from right to left to prevent a back-door one-timer. It was the type of shot which almost always ends up in the back of the net, but Comrie denied the A+ scoring chance.

With about 3 minutes left in the game, Julian Melchiori made an ill-advised play in his own zone, holding onto the puck too long rather than making the simple pass across to his d-partner. The puck stayed in the Moose end, and Chase de Leo took a slashing penalty. On the ensuing penalty kill, Eric Comrie made yet another great save, keeping the score 2-1 for the Moose.

Eric Comrie – Comrie was fantastic tonight, staying square to the puck, moving well side-to-side, and stymieing the Griffins on many high-end scoring opportunities. He stopped 37 of 38 shots, and was clearly the difference between winning and losing. Not only was he named first star, he was probably deserving of the second and third stars as well.

Josh Morrissey – Morrissey registered an assist and a big open ice hit, and looked very confident today on the powerplay. Playing alongside fellow rearguard Brenden Kichton has been a big help, as their skill and intelligence has meshed well. While Morrissey had 0 points in his first 12 AHL games, he has very respectable totals since then – 8 points in the past 19 games.


Chase De Leo – He scored the Moose’s first goal of  the game, created other chances using speed and craftiness, and made a few good defensive plays on some of the Griffins’ top players, including their leading scorer, former Jet winger Eric Tangradi. While he did a lot of good things tonight, he also took two penalties late in the third period which almost cost the Moose the lead and the game.


Jay Harrison and Thomas Raffl continue to be out with injuries. Raffl is practicing in a non-contact jersey and is likely day-to-day; Harrison isn’t practicing, and is week-to-week.