Kick start your week with the Monday Manitoba Moose Report, which fills you in on the latest news about the Jets’ AHL farm club.

The Moose ended their home schedule last week, playing four games at the MTS Centre – two against Nashville’s farm club, the powerhouse Milwaukee Admirals, and two against Chicago’s AHL team, the Rockford Ice Hogs. The Moose lost both games to the Admirals – a close game on Tuesday, followed by a tougher loss on Wednesday – but won both of their weekend games, beating the Ice Hogs 5-1 Saturday, and 5-4 Sunday. Despite the Moose being near the basement in the AHL standings, they managed to sweep the season series against the playoff bound Ice Hogs, 4-0. 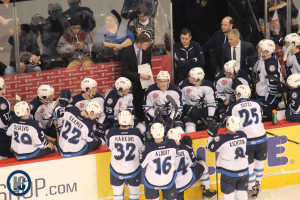 Several different Moose players came through this week. Scott Kosmachuk and Eric Comrie were very good in Saturday’s win against Rockford, with Kosmachuk scoring the game’s first goal and looking dangerous throughout the game, and Comrie making 32 saves on 33 shots.

Diminutive centre, Dan DeSalvo also continued his impressive play, netting the game winner on Sunday in the Moose home finale on a beautiful shot, extending his point streak to 6 games. Since being recalled from the ECHL’s Tulsa Oilders, he’s scored 12 points in 15 games; while the sample size is small, his 0.8 points-per-game leads the team, ahead of Nic Petan (32 points in 47 games – .68).

This week’s action also marked the professional debuts of Brendan Lemieux and Jansen Harkins. Each were second round picks in the NHL Draft – Lemieux, selected 31st in 2014 by the Buffalo Sabres, coming over in the Evander Kane trade; Harkins was selected 47th in last year’s draft by the Jets.

Lemieux looked fairly comfortable in his first two games, and excelled in the last two, scoring 2 goals and 1 assist in the two-game series against Rockford. Here is a sampling of his work – a beautiful shot on the powerplay off a pass from De Leo:

Meanwhile, Harkins was strongest in his debut against Milwaukee, registering an assist and displaying good vision and awareness with the puck.

The Moose team awards winners were also announced before Sunday afternoon’s game. Here are the recipients:

Brenden Kichton and Chase De Leo will battle it out in the last two games of the season to be the team’s leading scorer. Kichton has 41 points, while De Leo has 39.

The Moose have just two games left on the season – next Friday against the San Antonio Rampage (Colorado’s farm club), and Saturday against the Texas Stars (Dallas).

The NHL season is over, and the Jets finished in 25th place. To wet your draft appetite, here are the NHL Draft Lottery odds for all 14 of the teams which were eliminated from playoff contention:

While many Jets fans were hoping for a “tank”, what you’ll quickly notice from looking at these odds is that the incentive to tank is significantly less than in the past. In the recent past, the lowest a team could drop was just 1 spot; now, the team finishing dead-last is almost as likely to draft 4th as they are to pick in the top-3. In any case, the season is over, and Jets scouts and management will focus on getting the best possible player, regardless of where they select. Based on the odds, it is most likely that they’ll pick between 6th and 8th.

Stay tuned for NHL Draft items this spring on Illegal Curve, breaking down the top prospects, NHL mock drafts, and NHL Draft history. You can also follow me @PegPeteHockey