Recap of the Moose come-from-behind win.

In their last home game of the season, the Moose were looking to sweep the Rockford Ice Hogs – a playoff bound AHL team. The Moose had already won their previous three contests, including a 5-1 victory yesterday at the MTS Centre. Prior to the game, Moose team awards were announced, as follows:

The only award that remains is the Top Scorer Award. Heading into today, Brendan Kichton was leading the team with 38 points, while Chase De Leo was second with 36. The team has two games left on the road next weekend. 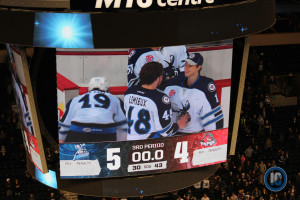 1-0 Rockford: A very strange bounce led to the game’s first goal just 25 seconds in – Kyle Connor’s former Michigan teammate (and linemate) Tyler Motte threw the puck in front, and it bounced off Andrew Macwilliam and in. (Motte’s first AHL goal).

2-0 Rockford: Tyler Motte entered the Moose zone on the right wing and faked a shot, then fed a beautiful pass across the ice to Cam Schilling, who slid it past a committed Connor Hellebuyck.

Moose respond, 2-1: Brendan Kichton took a wrist shot from the point, and it made its way through traffic to the back of the net.

Moose tie things at 2: Andrew MacWilliam picked up the puck near the left faceoff dot and threw a hard pass into the slot, which was deflected neatly by Chase De Leo into the top-right corner.

Rockford regains lead, 3-2: With under two minutes left in the first, Ryan Haggerty ripped a shot from the right faceoff dot which beat Hellebuyck high blocker side.

Rockford scores, 4-2: Less than a minute later, David Rundblad picked up a rebound in the crease area and slid it home.

Moose score, narrow deficit to 4-3: On the powerplay, Brendan Lemieux took a pass from Chase De Leo and absolutely wired a wrist shot into the top-left corner of the net.

Moose tie it up at 4: Chase De Leo walked in and from the left faceoff dot, and absolutely ripped a wrister off the bar and in. Probably the shot of the year for the Moose.

Moose go ahead, 5-4: Scott Kosmachuk circled the net and passed the puck to the point for Sean Escobedo, who moved it across to Dan DeSalvo who had just come off the bench; DeSalvo walked into the high slot and fired a low wrist shot which beat the goaltender low blocker. 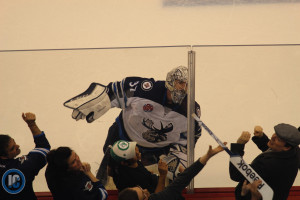 Chase De Leo – The most consistent forward on the Moose this year had perhaps his best game of the year. He scored a goal early to tie the game at 2, then assisted on a big goal in the second (Lemieux’s) to cut the lead to one, and scored the tying goal early in the third on an incredible wrist shot off the bar. De Leo was tremendous today.

Brenden Kichton – After arriving in Winnipeg at 5:30 am this morning off the Jets’ California road trip, Kichton insisted on suiting up for today’s game at 2 pm. He had a big impact, scoring the first goal, and adding two assists. Kichton is a leader on this team, and to date, the leading scorer on the team.

Dan DeSalvo – He scored the game winner with under three minutes to play on a great wrist shot. He now has a 6-game point streak, and 12 points in 15 AHL games. To say he’s been a pleasant surprise for the Moose since coming up from the ECHL would be a massive understatement.

Last home lineup of the Season

Brenden Kichton on his quick turnaround from California, and contributing offensively