Welcome to Hosting the Petard, a weekly column authored by Drew Mindell, host of The Illegal Curve Hockey Show. For a complete archive of columns previously written by Drew, “Cold Hard Rants“.

Ever since the fateful day in May, when the NHL was officially announced as returning to Winnipeg, the water cooler conversations throughout the city have been predominantly related to the Winnipeg Jets. The quest for season tickets begat the conversation about the team’s nickname, begat the actual make-up of the roster we will be cheering on come the first puck drop on October 9, 2011. 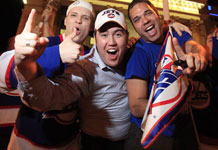 With the start of the free agency period now firmly in the rear view mirror, and the Winnipeg Jets roster beginning to take final shape, we see that their commitment to “character” was not simply lip service—rather it seems to be the driving force behind many of their roster decisions. The free agent signings, Tanner Glass, Derek Meech, Aaron Gagnon, Randy Jones, Rick Rypien and Mark Flood, are all of questionable NHL talent, but what they are lacking in on-ice capabilities, they more than make up for in the great intangible, “character”.  The question though, especially in light of the team’s refusal to give Anthony Stewart a qualifying offer (covered in more detail here) is why is the team putting so much stock into character, potentially at the expense of skill and talent?

Throughout the previous existence of the Winnipeg Jets in the NHL, they were often blessed/cursed with teams that weren’t loaded with dynamic skill. Yet, for the most part, fans still turned out in droves to cheer on teams that were most often on the losing end of contests. While there is no one reason why fans continually came to cheer on the team, it certainly helped that the team featured players that were, for the most part, well liked in the community. They were teams with high character. 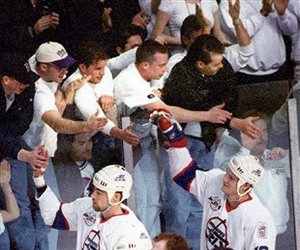 As this new team gets established in the community, they will be doing their best to build a brand. For a franchise, in any sport, their brand is of the utmost importance. A franchise is asking fans to part with their hard earned money (lots of it), and in return, fans hope for a winning product but demand a brand that they can be proud to call their own. Ask fans of the Portland Trail Blazers and they will tell you they were embarrassed to call themselves fans during the “Jail Blazers” era. Same goes for fans of the Los Angeles Dodgers during the current debacle surrounding the ownership of Frank McCourt. When Mike Kelly was alleged to have committed domestic abuse, the management team of the Winnipeg Blue Bombers was fortunate for the timing, as it allowed the team to fire him and thus prevent him from doing any more damage to the team’s brand. Damage the brand, and fans will repel from the franchise, as we saw in Portland and Los Angeles, regardless of the team’s performance.

The team that will take to the ice at the MTS Centre this coming season will, more than likely, lose more games than they will win. The educated and intelligent hockey fans of Winnipeg know this, and will temper their expectations accordingly. What they will demand is that the Winnipeg Jets put forth a top level of effort night in and night out. The words effort and character often go hand in hand. From Mark Chipman, to Craig Heisinger, to Kevin Cheveldayoff, to Claude Noel, we have come to know that the off–ice people responsible for the Jets are of the highest character. Come October, we will find that the on-ice talent will be average, but the effort will be top notch. The result of that night in-night out effort will be that the Winnipeg Jets brand will begin to manifest itself, both on and off the ice as a brand of the highest character, a brand that the fans of the Winnipeg Jets can be immensely proud to call their own.