The following quotes were taken from this afternoon’s conference call with Andrew Ladd, announcing his 5 year contract with the Winnipeg Jets.

When Ladd visited Winnipeg last month, it would be no surprise to Winnipeggers that he got the impression that True North was a first class organization.

“They made me feel welcome, and how they showed me they were going to run things, and how they were in the atmosphere, when they walked into the building, everyone who worked there was raring to go, everything was first class, for me that’s a big part of having a successful organization” 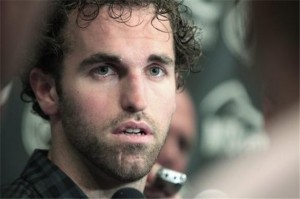 When the captain spoke with his teammates, the questions that he got weren’t about the city, but they were about the quality of the organization.

“It was more hockey wise, more about the organization, as a hockey player that end of it, you feel comfortable with how things are going to be ran and how you will be treated as a player it makes it easy to be excited about things”

Read more about Andrew Ladd’s thoughts on signing a long term deal in Winnipeg after the jump.

On playing in Winnipeg:

“I knew all along it would be exciting place to play, I played there for the World Jr.’s and, I knew the atmosphere and what fans were like, passionate people, you know, to have that in your head right away.”

On playing in Canada

“Being back in Canada is a big thing for every hockey player. To say I haven’t been thinking about that first game, it’s been on my mind a lot, something that’s really driving the excitement in my life right now, it’s going to be fun to be back in Western Canada, my family can jump on a flight and get here quick and my fiancée has family in the area, I’m excited to get going.”

On his tour of Winnipeg last month

“(I saw) different restaurants, driving around, checking out different neighborhoods, how many good communities there were throughout Winnipeg, it seemed pretty neat and a great place to live, checked out the practice rink, how quickly you could get everywhere was nice” 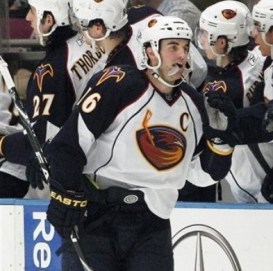 On purchasing a home in Winnipeg with his fiancée, they are set to be married in 2 weeks in Las Vegas.

“Another thing on the list, we did a little looking, kind of getting the feel from different areas, where we want to be, after our wedding, when everything slows down we’ll look towards finding a new place.”

On the players preconceived notions about Winnipeg

“I’m sure they do (have a misconception), I think it falls along the same lines as Buffalo, in terms of maybe gets a bad rap, but when guys play there and have the opportunity to play in Winnipeg, they’re going to grow to love it and make it home. The people that are there are a big part of it, down to earth an real friendly, especially when you have guys with families coming along”

On signing a long term deal

“Putting down roots, that was a big part about doing a long term deal, the fact that they wanted me around for that long, it’s nice to be in the same spot for a long time. It seems like every time I got comfortable with the city I was in, I was getting shipped out to a different place. To be able to settle down to meet people and get ingrained in the community with my fiancé is going to be an exciting thing”

It appears that Andrew is extremely excited to be a part of the Winnipeg Jets, having nothing but nice things to say about the organization and city. Being 25 and about to get married and start a family, having a long term deal was important to him. Winnipeg is excited to have Mr. Ladd here for the foreseeable future, and as time goes on we are sure he will love it.