Tanner Glass, a member of the Winnipeg Jets in their inagural season becomes the first free agent to leave Winnipeg. 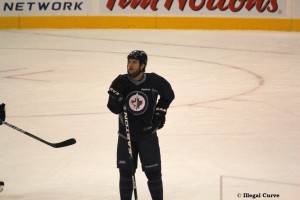 The Regina native signed a one-year deal for $750,000 Winnipeg last July 1. He goes to Pittsburgh where he gets a raise, a longer contract and a legitimate chance at a Stanley Cup. Glass was one win away from Lord Stanley’s Cup with Vancouver in 2011.

The hard work on the line of Tanner Glass, Jim Slater and Chris Thorburn lead them to be named the “GST Line”. Chants of “G-S-T” were a regular occurrence at MTS Centre, leading the Jets to release an official “GST” t-shirt.

He didn’t show up much on the score-sheet, recording five goals and eleven assists for sixteen points, but his heart and determination made him a fan favourite. This was exemplified on March 30, 2012 when he finished a game after breaking his foot. The injury ended his season early.

According to Ken Wiebe, Glass said “it was an extremely tough decision to leave Winnipeg.”

Scored the game winning goal helping the Jets earn their first win of the season.

He had his glove tossed into the stands by Adam Burish

Glass and the Penguins will visit Winnipeg on December 15, 2012. I’d expect him to get a salute from the crowd during a television timeout, as Jets fans had done during last season.