Winnipeg Free Press:  Gritty Rypien grateful for chance in Winnipeg.  He is a heart and soul type player who will give everything he has to this organization.

Winnipeg Free Press:?  Slow, steady wins the race. These guys were part of the Canucks organization and saw that it took years to develop a cup contender.

Winnipeg Free Press:  ‘Help wanted’ at True North.   The scale of what these guys have to get done this summer is quite mind boggling.

News and Observer:  Hurricanes add Anthony Stewart.  Last season was his first full (he played 80 games) in the NHL and he had 39 points, so his loss isn’t a terrible blow to the productivity of the team’s forwards. 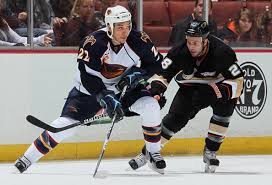 Toronto Sun:  Jets add trio.  Some good depth for the organization both in the NHL and for the AHL team.

USA Today:  Caps thought they were done…then came Vokoun.  Nice signing by Washington, especially considering how much they got from Colorado for Varlamov.

Sporting News:  Tomas Kaberle among few big names left unsigned.  Has Kaberle held on too long?  Has his stock fallen.  I’m guessing at least 1 or 2 teams will still take a chance on the 33 year old.

More from Around the NHL and a list of yesterdays Free agent signings after the jump.

Calgary Herald:  Flames were Richards second choice.   Did not think the Flames would offer him as much as they did, but obviously new GM Jay Feaster wanted to make a splash.

TSN:  Leino joins new look Sabres.  Seems like quite a jump in salary for a guy who has still never scored more than 19 goals in a season.

New York Post:  Small-market buying spree good for the NHL.  I agree that it’s a good thing to see teams in Buffalo, Calgary and Columbus spending some $$$$. 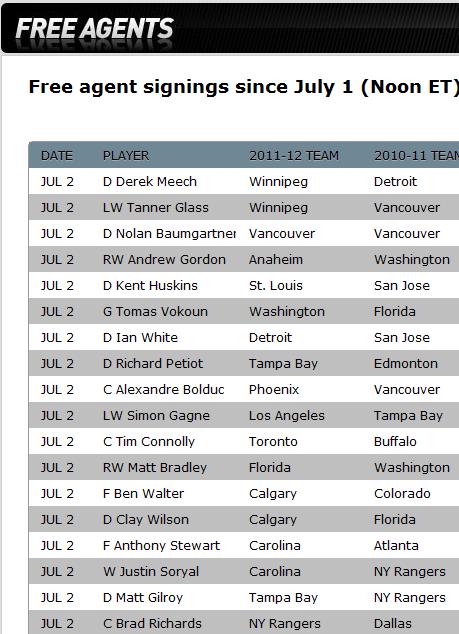