Staying out of the box is no problem for Wellwood 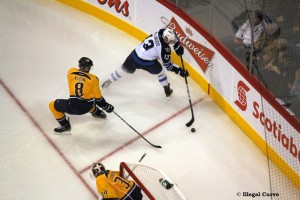 Penalties have been a problem this season for the Winnipeg Jets. In Tuesdays overtime loss to Buffalo the Sabres had 12 powerplays, and scored four of their six goals with the man advantage. It was a similar story on Thursday night, where the Panthers scored two of their four goals while the Jets had a man in the box.

Before Friday night’s games, Winnipeg is second to Philadelphia for most minor penalties in the league with 80. Hooking, holding, tripping, roughing, you name it, they’ve done it.

One player who has managed to stay out of the fire this season, is offseason acquisition Kyle Wellwood. Not only has Wellwood contributed 10 points in sixteen games (5g 5a), he has managed to do it while playing a clean game. The only regular with less PIMs than Wellwood is Tim Stapleton.

This isn’t an anomaly for Wellwood, throughout his career he has not made many trips to the sin bin. This includes a streak of 159 games without a penalty that ended in 2009.

Here are his career numbers.

According to Wellwood, his style of play keeps him out of the box

“I’m not as physical as the other guys, a lot of people rely on their sticks and physical play defensively, and I rely on my stick on my ice and positioning, it’s just different styles.”

Wellwood understands that this is his style of play, and he’s sticking to it

“I play my own game, and stay out of the box, certainly, we lack some discipline in that area on this team, I guess I can tip the scale the other way, (but) we’d have even more penalties.”

Hopefully the team can rebound from Thursday nights loss and turn things around Saturday at Columbus.