The 2nd meeting between these two struggling teams. The Blue Jackets and Jets played a split squad game to open the pre-season. Now the 14th in the East Jets and the 15th in the West Blue Jackets are both desperate to get a win and turn their seasons around. 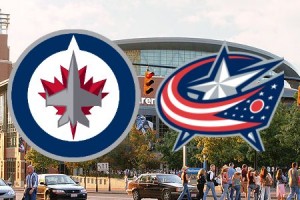 The Story: The Winnipeg Jets might smell a stinky cologne when they meet the last-place-in-the-NHL Columbus Blue Jackets on the road tonight because the Blue Jackets have lost three games in a row and are absolutely desperate for a win.

Blue Jackets General Manager Scott Howson completed two trades this past week, acquiring center Mark Letestu, 26, from the Pittsburgh Penguins on Tuesday in exchange for a fourth round draft pick and also moving defenseman Kris Russell,24, to the St.Louis Blues for defenseman Nikita Nikitin, 25. To say that the moves themselves were made out of desperation may or may not be the case, but the moves undoubtedly have to do with the fact that the team has been horrible so far this season.

The Blue Jackets’ dismal start to the season is obviously not what Scott Howson was expecting when he acquired center Jeff Carter from the Philadelphia Flyers in the summer and signed UFA defenseman James Wisniewsi to a six year/$33 million contract but the two players have missed large portions of the season as Wisniewski was suspended for the first eight games of the season and Jeff Carter has missed the last 10 games with a foot injury.

Injuries have also plagued the Winnipeg Jets of late as well but positive news did come on Friday morning. Forward Eric Fehr, who is recovering from off-season shoulder surgery, has been cleared for contact in practice, and although he is not expected to be back for awhile, the Jets can certainly use Fehr on the team’s first two scoring lines when he is cleared for game action.

After tonight’s game against Columbus, the Jets will return to Winnipeg for a three-game homestand, beginning on Monday, November 14th against the Tampa Bay Lightning, and continuing with games against the Washington Capitals (Thursday, Nov.17) and Philadelphia Flyers (Saturday, November 19th).

Defenseman Paul Postma replaces Brett Festerling on the blue line.  Festerling was injured during practise yesterday and did not make the trip.

Scott Arniel’s Blue Jackets look at end a 3 game losing streak in which they have been outscored 19-6.  The offense is getting some help as forward Jeff Carter returns to the line up after missing the last 10 games due to injury.

NOTES… Jets goaltender Chris Mason has been activated off the injured list….. Peter Mannino has been sent down to the St. John IceCaps of the AHL….Mason is 1-2-0 with a 2.68 goals-against average and .893 save percentage this season…..Bryan Little won 75% of his face-offs on Thursday night against the Panthers, which is significant because he
has struggled in that department at times this season (51.8% on the year)…..

Staying out of the box is no problem for Wellwood
Jets on a Deadline: Jets v. Blue Jackets–November 12, 2011