Recap of the Moose SO loss.

In their second game in two days, the Moose got a home rematch with the Texas Stars. After leading Tuesday’s game late in the third, the Moose relinquished the lead, and the game, giving up a pair of late goals on the penalty kill, and losing 3-2 in a game which they deserved to win. Wednesday was their chance at redemption. 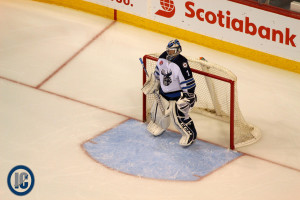 Just a minute into the game, Nic Petan fed the puck into the low slot for Scott Kosmachuk, who beat the goaltender Lagace from in tight, putting the Moose up 1-0.

Halfway through the first, John Albert sent a lovely backhand pass into the slot for Nic Petan, who went top shelf to put the Moose up 2-0 early in the game.

After Thomas Raffl took a neutral zone tripping penalty, Derek Hulak scooped the puck behind the Moose net, and wrapped the puck to the far side on Jussi Olkinuora, narrowing the score to 2-1 for the Moose.

J.C Lipon entered the Stars’ zone on an odd-man rush and patiently held the puck until a seem opened for Brendan Kichton; Lipon dropped it back to Kichton, who took a wrister from the slot, then collected his own rebound and found twine, putting the Moose up 3-1.

Halfway through the second, Jussi Olkinuora stopped a harmless shot from the boards and kicked out a huge rebound to Stars d-man, Esa Lindell; Olkinuora slid over a touch too slow and Lindell beat him high blocker side to get the Stars within one.

With a few minutes left in the second, a Stars’ centreing attempt left Jussi Olkinuora sprawled on his side – several Stars banged away at the puck, which Olkinuora held on the line with just one pad. Eventually, Olkinuora dragged the puck into his own net, tying the score at 3. (Forward Curtis McKenzie was last to bang at the puck).

A minute into the third, Chase De Leo released a wicked wrister from the left faceoff dot and rang it off the crossbar and out.

Just a minute after De Leo’s near miss, Ludwig Bystrom got the puck in the slot – John Albert slid across to block the shot, but slid Bystrom waited till he slid past and fired a low shot which beat Olkinuora.  (Olkiunora was then pulled).

With the score now 4-3, 2014 first-round pick Julius Honka took off from the right point and sprinted down the boards, cut into the slot and made a quick deke across the crease to beat Eric Comrie, putting the Stars up 5-3.

After a scramble around the net where Kosmachuk tried to clear the puck, Stars’ forward Curtis McKenzie managed to get just enough of the puck to beat Comrie. 6-3 Stars.

With ten minutes left in the third, a slap pass from Josh Morrissey deflected off a body on the way to the net, and was then deflected in by Matt Halischuk, cutting the Stars’ lead to 6-4.

Just two minutes later, Nic Petan got the puck behind the net and centred it out front – meanwhile, less than a second prior, Thomas Raffl pushed his defender in into the crease to gain separation. The puck deflected off that defender (Bystrom), and found the back of the net, putting the Moose within one. (6-5).

With just two minutes left, Julian Melchiori floated a shot from the point which beat a screened Maxime Lagace, tying the game at 6.

Then, with under 20 seconds left, Eric Comrie made an outrageous save to keep the score tied, pushing hard off his left skate an sliding across in order to thwart a tremendous chance that should have ended the game.

A minute into three-on-three, Nic Petan got a break down the left side, and waited for help to arrive; he made a spinning, behind the back pass to Josh Morrissey, who then made a touch pass to John Albert, but Albert misfired, hitting the middle of the net rather than the open third.

With 9 seconds left in OT, J.C Lipon sent Brenden Kichton in alone – with a backchecker causing him trouble, Kichton just lifted the puck a hair wide

TX: Brendan Ranford – Tries a backhand deke but is stopped by Comrie

MB: Chase De Leo – Comes in with speed but shoots at the goaltender’s right pad

MB: Nic Petan – Tries about 6 dekes before lifting a backhander just over the net

TX: Jason Dickinson – Comes in down the left side, cuts in, and starts dragging the puck on his backhand, just outside the crease; when asked after the game, Comrie said he was expecting the puck to go five-hole – instead, Dickinson cut all the way across and slipped the puck around the outstretched left pad. Game over.

Nic Petan – He made a clever pass on the Kosmachuk goal to open the game, a great shot to put the Moose up 2-0 early in the game, and scored again to get them within one late in the game. He was also the most dangerous player in OT for the Moose, by a wide margin. He almost always manages the puck intelligently, and he creates more chances than anyone else on the team. A fine display of his skill tonight.

John Albert – He created the initial play on the Petan goal, and made a few other chances out of nothing with speed and smart play. After missing time with injuries earlier this season, he finally looks to  have his jump back, and has been one of the Moose’s best players in the past few weeks.


J.C Lipon – He showed great patience on Kichton’s goal – something which he has often lacked in the past – as well as all the usual jump and hustle. Adding a playmaking element to his game would really help round out his game, as his speed, shot, and already serve him in good stead.

With just 18 games played on the season – fewest among all Moose starters – Jay Harrison has taken the bad luck badge away from Thomas Raffl. Harrison remains out indefinitely.