Getting you set up for Game 1 of Round 2 between the Jets and Predators. 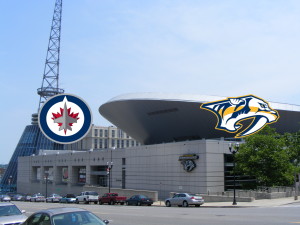 The Jets traveled on Thursday which means all the questions that you may have had on Wednesday were not answered yesterday.  Those questions likely included: 1) How is Patrik Laine?  2) Are Nikolaj Ehlers and Tobias Enstrom drawing back in? 3) How is Steve Mason? 4) Is Joel Armia still in a non-contact uniform? 5)  Do we need to put out an APB on Mathieu Perreault and Dmitry Kulikov?  6) Why are we?  Ok the sixth question is more existential and not necessarily something that could be answered based on what happens during Jets morning skate but I wanted to ensure you were paying attention.  The point is that there are more questions than answers and based on the cone of silence that has enveloped Jets head coach Paul Maurice during the playoffs usually the best place for an answer is the morning skate (although even that isn’t a guarantee). Stay tuned.

According to Ted Wyman of the Winnipeg Sun one of the first players on the ice today is Patrik Laine which would appear to answer the first question while his colleague from the Sun Ken Wiebe answers question five as Mathieu Perreault is wearing a non-contact uniform whole Dmitry Kulikov is not present.  Via Mike McIntrye of the Winnipeg Free Press we learn that Tobias Enstrom is skating while Joel Armia, Dustin Byfuglien, Paul Stastny and Connor Hellebuyck are not.

Coach Maurice:  Is Enstrom good to go?  Starting round 2 on the road.  If Chiarot plays what does he add to the blueline?  How did his players handle being away from game action for a week?  What does he take from the regular season series against the Predators?  Did he speak to Peter DeBoer last night?  Importance of getting all four lines rolling.  How much will the arenas be the 7th man for both the Pred and Jets?  How did Nashville make hockey work?  On Hellebuyck’s routine.  Who will back up tonight?

As you have come to expect nothing from the coach ahead of the game so we will have to wait for pre-game warm up before anything is finalized.