Note:  Tune into the Illegal Curve Hockey Show on TSN Radio 1290 as the guys discuss all the latest Stanley Cup Final and NHL news starting at noon until 3 pm on Saturday.  Guests: Michael Farber (SI.com) to talk Neutral Zone Documentary and Grant Sonier (Formerly of ESPN and now GM of the Charlottetown Islanders of QMJHL).

Globe and Mail:  The game’s best when it’s just the players.

Chicago Sun-Times:  A voice of authority on the Blackhawks.

Boston Herald:  Get back to B’s basics.

Boston Herald:  Bruins struggling out of the blocks.

Winnipeg Sun:  All is quiet in Winnipeg Jets front office.  Is the lack of news cause for concern?  Guess we will be finding out pretty, pretty, pretty soon. 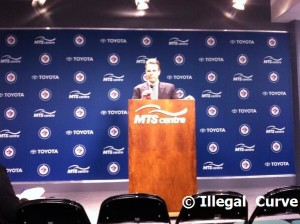