Globe and Mail:  Blackhawks fatigued, but energized after marathon Game 1.

Chicago Sun-Times:  Talented Blackhawks have versatility to win in many ways.

Chicago Sun-Times:  Burr Ridge Hawks fan recovering after puck hit her ‘like an arrow’ to the face.

Winnipeg Free Press:  Evander Kane tweets then deletes homophobic comment, apologizes.   Looks like Thursday really was the Evander news day.  Seems his twitter got him into a wee bit of trouble although by this AM he had deleted and apologized for the comment.

Winnipeg Free Press:  Slater on the mend.   Says he would have been good to go had the Jets made the playoffs.  Gonna need a healthy Slater next season to get this team into the playoffs.

Winnipeg Jets:  Evander Kane video exclusive.  Evander Kane talks about his summer so far, his recent surgery and also spoke about the season ahead, his junior career and the playoffs. 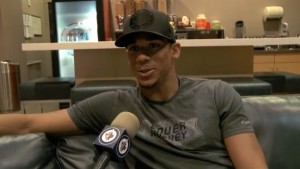