The stage is set: Jets vs Wild in 1st Round of Stanley Cup Playoffs

It will be Friendly Manitoba vs Minnesota Nice in the 1st round.

The Jets will be making just their second post season appearance since the move from Atlanta and unlike the first time they made it back in 2014-15 they will be getting a Central Division opponent in the 1st Round, one that resides just 6.5 hours southeast of here in the Minnesota Wild.  Another change for the Jets is that this time they will have home ice advantage and considering they have the best home record in the NHL (and sit as the only team with 30+ wins in their home barn) that could prove to be quite the advantage.

The problem is the “friendly” or “nice” nature of both fan bases tends to ensure a higher degree of civility than you expect when it comes down to the passion of sports.  Centre Paul Stastny spoke about it after the last Jets win and how it sometimes requires a playoff series against a team before that rivalry really blossoms into hate. 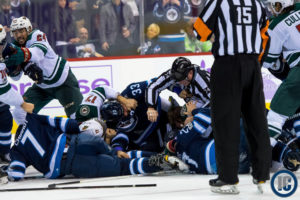 These two teams have squared off four times in the regular season and the results have been more favourable to the Jets:

Although as is illustrated above they haven’t played in some time.

Lots will be made of the Jets leadership group of captain Blake Wheeler (Plymouth, MN) and alternate captain Dustin Byfuglien (Roseau, MN) and their connection to the state.  Add first-year Jets forward Matt Hendricks (Blaine, MN) and it should be quite the homecoming for some of these sons of Minnesota.

Another close tie, one that will have to be set aside once the series starts, is the friendship that formed between starting goalies Connor Hellebuyck and Devan Dubnyk after training together in Kelowna this past summer.

With the way Jets fans have been travelling down to Minnesota the last few years and the dueling chants we’ve heard this really should be an excellent series to kick off the 2017-18 Stanley Cup Playoffs.

Fun Fact:  Last time a Winnipeg based team faced a Minnesota based squad in a pro hockey playoff series goes back to the WHA days when the Jets defeated the Fighting Saints 4 games to 1 in 1972-73.

Star Tribune:  Wild expecting ‘great test’ from Jets in first-round matchup.  Just southeast of here the folks in the State of Hockey have already turned their focus onto the series against Winnipeg.

Winnipeg Sun:  Jets to play Wild in first round.  Who is ready for some Friendly Manitoba vs Minnesota Nice?  Should be a good tilt for these regional rivals with plenty of storylines ahead of the first game.

TSN:  First round matchup against Wild ‘perfect scenario’ for Jets.  TSN Hockey analyst Jamie McLennan explains why facing the Wild in the first round is a “perfect scenario” for the Jets, and discusses whether Connor Hellebuyck can get the job done in the playoffs despite no postseason experience.