On August 21, 2011 Gary Lawless and Ed Tait wrote an article in the Winnipeg Free Press reporting that Winnipeg would be the home for the NHL’s kickoff party, called “NHL Face-Off”.   The celebration would be the weekend of October 6, ending on the 9 with the Jets first regular season home game.

One would think, that an NHL Launch Party, with a live network broadcast at The Forks, including big screens showing the opening games Maple Leafs vs. the rival Canadiens at 6pm and the Stanley Cup Loser Vancouver Canucks vs. the Crosby-less Penguins at 9pm.  A party, lasting all weekend until after the Jets first regular season home game would be a great idea, who wouldn’t want to attend such a function. 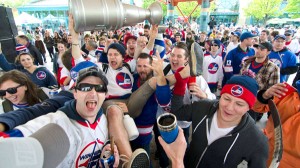 Adding to the excitement, the celebration will feature a “major Canadian concert act”.  That is just the cherry on top of what will already be a weekend to remember.  At this point, most fans must be thinking “Wow, doesn’t this celebration just sound amazing, where do I get tickets to this event? Oh what? They’re free! Wow, thank you NHL.”

Continue reading after the jump.

One would think that would be the general reaction for most fans, until, the bomb drops, the bomb that names the rumored “major Canadian concert act” as Nickelback. Naturally, this caused a public outcry against the band and the NHL. The Winnipeg Free Press even published a very comical open letter from current and former music critics Rob Williams and Bartley Kives saying “We’re begging you…no Nickelback!”

***CAUTION, IN THE NEXT PARAGRAPH, I MAKE POSITIVE COMMENTS ABOUT NICKELBACK, READ AT YOUR OWN RISK***

I’m going to be completely honest, if Nickelback did play, and only decided to play music that they had recorded prior to 2001, I don’t think that it would be a terrible thing. “Breathe”, “Worthy to Say” and “Too Bad” are still rocking arena songs that would get fans jumping.

While I don’t think Nickelback would bring the apocalypse (Gasp!), the call has been made to consider someone else, lets take a look at some other alternative “major Canadian concert acts”. To do this, I’ll have to define “major Canadian Concert act” as a band with similar album sales and concert gross/production to Nickelback.

Believe it or not, Nickelback have sold 35 million album copies worldwide and were the 11 best music selling act of the 2000s. Just because they have sold a ton of albums, does not mean they are necessarily good.

Also known as “The Holy Triumvirate”, Rush began in 1968 playing clubs in Toronto, Ontario. As depicted in the excellent documentary “Rush: Beyond the Lighted Stage”, the band never received the mainstream success of a band like Nickelback, but their musical style has influenced a number of commercially successful rock acts and spawned a wide array of diehard fans. Rush have sold more than 40 million records worldwide, and their sales place them after The Beatles and The Rolling Stones for most consecutive gold or platinum studio albums by a rock band. Did I mention they were appointed to the Order of Canada in 1997? 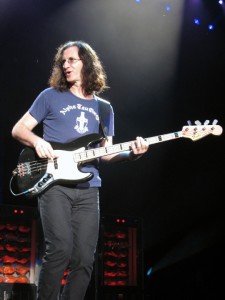 After a 26 year hiatus of appearing in the city, Rush returned to Winnipeg in 2008, and developed a connection to the city after donating $100,000 of concert revenues to Winnipeg’s new Canadian Museum for Human Rights. They returned to the road in 2010-11 but did not make a stop in Winnipeg. There are no scheduled dates on their website, and their schedule appears wide open.

The Kingston, Ontario band are no strangers to the city of Winnipeg or Canada’s game. Hockey, the Toronto Maple Leafs and the Stanley Cup are just some idiom’s that have graced the lyric sheets in the liner notes of their classic albums. (Do people still read those?)

They have released 12 studio albums, won 14 Juno Awards, and have been inducted into Canada’s Music Hall of Fame & Walk of Fame.

While Gord Downie & co. have no scheduled tour dates for the rest of the year, they last played here earlier this summer in July at Canwest Global Shaw Park. I don’t think Hip fans in Winnipeg would be opposed to a return, but the concert organizers may consider someone who hasn’t played here so recently.

Winnipeggers are no strangers to “Uncle Neil”, as he was born here in 1945. After his family moved to Ontario shortly after, he returned in 1960 to attend Kelvin High School.

Young has accomplished more than anyone could dream in his 40+ years as a musician. He has been awarded the Order of Manitoba, the Order of Canada. He has released 34 studio albums, and been named to the Rock and Roll Hal of Fame twice (as a solo artist and as a member of Buffalo Springfield).

The 65 year old is a known hockey fan, being shown on CBC frequently during last year’s NHL playoffs sporting a Manitoba Moose hat. 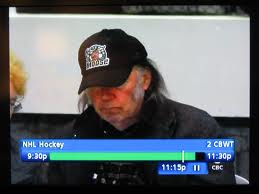 This decade, he has played in Winnipeg in 2006 with Crosby, Stills, Nash & Young, in 2008 with His Electric Band and for 2 solo shows in 2010. Young has no shows scheduled for the weekend of NHL Face Off. I remember the disappointment around the city when he pulled out of the Junos in 2005, if he made an appearance at opening weekend; I don’t doubt that he could tear the house down.

Having never heard any music released post 1990, I will be the first to admit that I am not overly familiar with Montreal’s Arcade Fire. However, I am not completely oblivious, and am aware that this is a band on the rise. They burst onto the scene in 2004, and could be at their career peak after winning the Grammy for Album of the Year for the album “The Suburbs” earlier in 2011.

Their last played here in 2010 at the MTS Cente to rave reviews, and have no dates scheduled the weekend of the NHL Faceoff. They are no stranger to playing free public concerts, as they are playing in Monteal in September 22 as a part of the Pop Montreal Festival. An appearance in Winnipeg would surely attract more than the 5,500 that were at the MTS Centre in 2010.

Keep in mind, that the quality of these bands are of much higher caliber (cost more $ to bring in) than bands who have previously played at the NHL’s Faceoff Event.

I only named a few bands I consider to be a “major Canadian Concert act” are there any other bands or artists that I am missing that could be included? Sound off in the comments.