Winnipeg Free Press sports reporter Ed Tait has confirmed through his Twitter account that The Winnipeg Jets have signed free agent forward Rick Rypien, 27, to a one-year, $700,000 contract. Winnipeg hockey fans are very familiar with the Coleman, Alberta native as he played parts of five seasons for The Manitoba Moose of The American Hockey League.  Rypien has played 119 games sporadically over six seasons with The Vancouver Canucks, registering 9 goals, 7 assists and 226 Penalty Minutes. 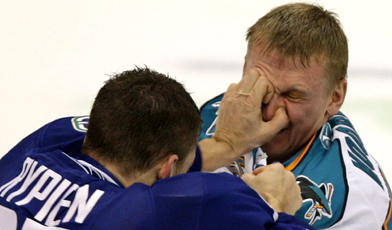 As per TSN, the Jets have also agreed to terms with former Lightning defenseman Randy Jones for one year, $1.15 million. Jones has also played for the Philadelphia Flyers and the Los Angeles Kings over a six-year NHL career.

Illegal Curve Analysis: Jones is a physical, defensive type who will solidify Winnipeg’s blueline with his leadership and experience. Jones is smart with the puck and has the ability to contribute offensively  (Jones had 33 points for The Philadelphia Flyers in 2007’08).

Illegal Curve Analysis: Flood was Manitoba’s best defenseman last season and True North Sports & Entertainment (owners of The Moose and Jets) is very high on him. Flood will be invited to training camp in the fall but will most likely start the season in The American Hockey League and be a call-up for The Jets next season.