Over the weekend the Winnipeg Jets signed their first free agent in franchise history; Derek Meech to a 1 year, $700,000 contract. Originally from Winnipeg, Manitoba, Meech had spent 7 of the previous years in the Detroit organization. He won the Stanley Cup with the Red Wings, appearing in 32 games in 2007-08. After bouncing in and out of Detroit’s lineup throughout his tenure, Meech spent all of last season in Grand Rapids of the AHL appearing in 74 games for the Griffins scoring 37 points in 74 games.  Additionally, he lead his team in plus/minus with +17. 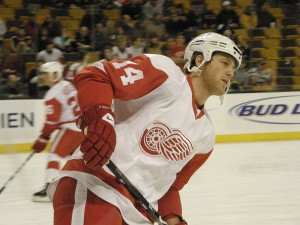 Meech appeared on the Illegal Curve Hockey Show this Saturday and said that spending a year in the AHL has allowed him to develop his game.

“I was in & out of the lineup over 3 years, it takes a toll mentally, it was nice last year to get a full season and be relied on and take a leadership role, just to be in games every night it was a really good feeling for me, and it gave me a bit of my identity back, I’m feeling good about my game now, I think I’ve matured over the years here and I’m looking forward to having a good summer training wise getting prepared for camp”

Having spent a significant time in the Detroit organization, Meech observed the work ethic of some sure fire hall of famers. He hopes to bring that professionalism with him to Winnipeg.

“ I was there for 7 years, played 3 years in Detroit, was lucky enough to be a part of the Stanley cup winning team, just being around Hall of Famers like Lidstrom, Rafalski, you can name a ton of guys, seeing how down to earth they are and how good people they are on & off the ice, that’s kind of where you really notice why they have so much success, they’re very professional and that’s something I’d like to bring over to this organization”

To listen to the full interview with Derek Meech on Saturday’s Illegal Curve Hockey Show (July 2, 2011 – part 2), subscribe via RSS, iTunes or download it direct here.

The next episode of the Illegal Curve Hockey Show will air this Wednesday from 6pm-8pm Central Time, on Sports Radio 1290 in Winnipeg. As always, we will be hosting a live chat here at Illegal Curve.