A recap of the Moose game against the Rocket.

The Moose re-assigned Jacob Cederholm and Justin Woods back to the Icemen. 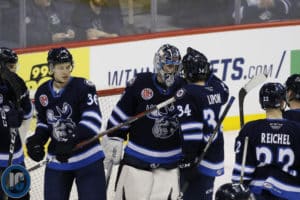 – The Moose opened the scoring thanks to Cam Schilling’s first goal of the season;
– A nifty no-look pass by Jansen Harkins set up Alexis D’Aoust for his fifth goal of the year and a 2-0 Moose lead;
– Kristian Reichel gets taken out (off balance as he reached for a puck) into the boards and a melee ensued;
– Moose got the benefit of a quick whistle on a puck Comrie appeared to have covered (Laval put it into net);
– 1st period ended 2-0 for the Moose who held an 11-10 shot edge after 20 minutes.

– The Rocket were more aggressive in the middle frame out shooting Manitoba 11-7 but still couldn’t beat Eric Comrie;
– Not a particularly exciting period and it ends with the home side maintaining their two goal lead.

– Rocket had some chances to get back into the game but couldn’t beat Comrie (even when it looked like they had);
– Lots of bad blood which seems odd considering these teams rarely face each other;
– Logan Shaw was hurt, initially went to the bench but then left for the room;
– Another disallowed Rocket goal (this was the right call);
– Jansen Harkins fired it as he approached centre ice into the Rocket empty net to make it 3-0;
– Late in the game (23.1 seconds left) Marko Dano scored to make it a 4-0 contest.

– That was Eric Comrie’s second shutout of the season (and second in last five games);
– Jansen Harkins had 1G 1A;
– Veteran D man Cameron Schilling scored his first goal of the season;
– Michael Spacek added to his team leading assist total(19).
– After Marko Dano went goalless in his first 9 games with the Moose he has three goals in his last five games;
– Eric Comrie has a .921 save % (which is 4th best in the AHL)
– Comrie has faced the most shots in the AHL this season (769) which averages to 33.4 per game.

Following the game coach Vincent didn’t have an update on Logan Shaw who left the game in the 3rd period.

The Moose are set to practice at the IcePlex 12 noon on Friday as they get ready for a re-match with the Rocket at Bell MTS Place on Saturday night.  Be sure to start your day with the AM papers at 7 am on illegalcurve.com.