The feisty Jets forward is off to a new team. 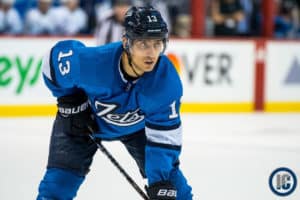 He made up the T in TLC (Tanev-Lowry-Copp) line but after spending three seasons here in Winnipeg the Toronto born winger is off to join the Pittsburgh Penguins on a six year deal.  The Jets signed the undrafted Tanev back in 2015-26 after he spent four years playing for Providence College which included a Frozen Four championship in his final year in college.

Tanev put up 14 goals and 15 assists for the Jets last season and has earned himself an increase from the $1,150,000 he earned last season in Winnipeg.  And today the Penguins announced they have signed him to a six-year deal with an AAV of 3.5 million.

The Jets will face their former winger for the first time on their season opening road trip as the fourth and final game will take place in Pittsburgh on October 8th.  He will be in Winnipeg for the first time as an opposing team member just five days later as the Penguins will be the second home game the Jets play.