Reaction to the Kronwall hit on Havlat

From Abel to Yzerman we get this picture and the pertinent facts. 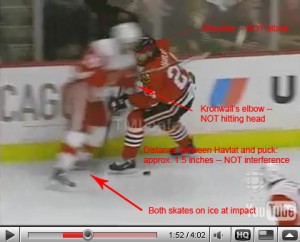 Not surprisingly reaction has been mixed from both sides.

Bottom Line is the puck came around the wall, Havlat had it in-between his legs, Kronwall didn’t leave his feet, did it on the follow through, he just finished the check.  He hit the guy fair and square.

It was a fair hit, a good hit. I’ve made plays like that before. The puck was between (Havlat’s) skates. I didn’t leave my feet. It was a clean hit. I’d do the same thing again.

I thought it was gutless all around. I thought he jumped. Marty didn’t have the puck. His forearm came up high. He’s done it hundreds of time in the League, and it seems like nothing ever happens. He could have easily come in and used his shoulder and hit him with the side, and it would have been fine. But instead he comes up and explodes with his fist and his forearms and jumps. I just don’t understand it. We’ve talked about it, and eventually we’ve got to clamp down. These guys got to pay for it — guys that are taking shots to the head. It’s unacceptable and it’s not like it’s the first time it’s happened with that guy. There’s no need for it in this game.

This is not a penalty. Shoulder — bang! — check with a guy’s head down. This is a thing of beauty. If you don’t like it, change the channel.

My gut reaction to the hit was that it wasn’t dirty.  If you watch it in full speed I just think that it was a quick hit that Havlat wasn’t ready for.


I thought the bigger problem was the post hit reaction.  I understand wanting to defend a teammate after you think he’s taken a dirty hit but at the same time you need to consider what additional damage you can do to that same teammate who is lying prostrate on the ground.

When Todd Bertuzzi suckered Steve Moore from behind and then drove his head into the ice, I’m sure that is where the majority of the damage came from, but how much trauma was caused by the added weight of Andrei Nikolishin?


Similarly, with Havlat on the ground, you have no idea what sort of injury he has sustained so when Dustin Byfuglien (I think) throws Kronwall’s 189 pounds back onto Havlat, who knows what sort of additional damage you could cause him.

And while Quenneville was less than pleased with the hit, and despite Havlat not practicing today, Quenneville expects Havlat to play on Sunday in Game 4.

From NHL.com we get this poll:

Update:  Here is a good video from TSN which shows other Kronwall hits.  Guy’s a beast:


So what do IC readers think?  Clean check or dirty hit?