Joel Quenneville, head coach of the Chicago Blackhawks, has been fined $10,000 for public comments critical of League officiating made following yesterday’s game against Detroit, the National Hockey League announced today.

The money goes to the NHL Foundation.

I’m assuming he ran afoul of Rule 40 (Abuse of Officials) which reads:

No surprise that he was fined for his comments.  In case you missed them, Joel dropped the following gems during last night’s press conference;

“We witnessed the worst call in the history of sports at the end of the period.”

“They destroyed whatever was happening on the ice.” 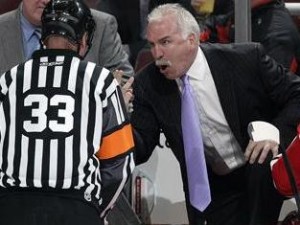 “I couldn’t find the penalties. You could argue along the way. They ruined the whole game. That’s the gist of what I’m trying to say.”

Now I understand that he was aggravated at the calls but he totally blew his cool (when he found out about the Walker minor) and unfortunately it transferred to his team’s play for the remainder of the game.  He lost control of himself and then the team and now it appears that the series is all but over for these young Hawks.