The following quotes are from the conference call with Blake Wheeler to announce his 2 year $5.1 million contract signing with the Winnipeg Jets. 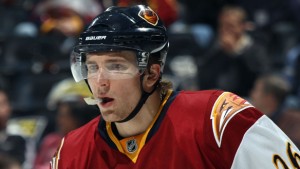 On the type of game that he plays

“I think I’m kind of developing into the power forward that I was projected to be when I was younger, I’m starting to learn how to use my size to my advantage, it was definitely a learning curve the first couple of years, that if I can use my size and my speed to my advantage it makes it a bit tougher (on my opponents). I’m learning how to do that and am having a bit of success with it, especially the later part of last year. That’s what I’m trying to work on, being more powerful out there, and tough to play against.”

On if the best is yet to come

“I don’t think there’s any question, after the trade to Atlanta, I was given a bigger role and more flexibility, as a player that’s what you want. I felt I did a good job with that opportunity, and got excited about a similar opportunity in the future, building off the first few years of my career.”

Read more quotes from Blake Wheeler after the jump

On his goals for the year

“I think that given that added role, I’m definitely looking forward to building on what I did in Atlanta last year. I don’t set any barriers or goals, I definitely want to build off what I did, I think I can eclipse my totals from last year. It’s all about fitting in to the team structure. At the end of the day it’s all about getting those wins, the biggest thing I want is to be able to contribute to wins every night, there’s different ways to do that, if you’re playing in a role getting those opportunities to go out there on the ice, you want to be productive. That’s my biggest goal, to be productive in the minutes I’m out there and really earn the minutes when I’m on the ice.”

On if the team has enough to make the playoffs

“There’s no reason why we can’t, look at where these guys were through January, they were in a really good spot to make the playoffs even last year, and had a really tough 20 game stretch that knocked us back there. Minus those 20-25 games, they were leading the division for a while in the Southeast”

“For the most part the pieces are in place for guys to step up, we’re a really young team. If we can build on the things we learned from last year there’s no reason we can push for a playoff spot”

On the passionate fan base in Winnipeg

“I think you want to play in front of fans, there’s no question about that, there’s really nothing better than knowing every night you’re going to have a good support system in front of you. That they’re going to be cheering you on through the good times and the bad, certainly that’s one of the exciting things when we were moved to Winnipeg, you knew what you were going to get.”

“We knew the fans up there were excited to have us, they showed that by selling out the season tickets in just a few minutes. That there solidifies it was probably the right move to go to Winnipeg. It’s too bad it didn’t work out in Atlanta, but we’re really excited about the new opportunity for us.” 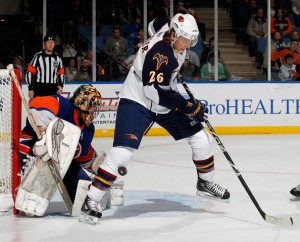 On his relief about avoiding arbitration

“There’s no question, it’s (arbitration) really a great thing to have as a player, and it gives you that extra leverage, we’re fortunate to have that in the CBA. It’s a good sticking point for you in terms of negotiating, there’s no question you feel fortunate to have that right, but at the same time it’s never the most comfortable thing sitting in the room with your employer and hearing maybe not the nicest things about you. It’s definitely nice to start on a really good foot with these guys, and I’m really excited that it was done in a timely fashion. I think all sides are happy with the way it turned out.”

On if he thought it would go to arbitration

“It was a mixed bag for sure, I wasn’t necessarily cheering for them, but I wasn’t cheering against them. All those guys I played with, I was happy to see those guys succeed and win, I knew they were capable of it. It definitely hurt to not be a part of it, that’s unfortunately part of sports, you have to take it with a grain of salt and move on. It narrows your focus a bit, the guys who you went through the battles with for 2 and a half years, come away with the trophy; it makes you want to get your name on it too. That’s the goal, to turn this organization into one that can compete for one of those pretty soon.”

Blake Wheeler is excited about the prospects about playing in front of sellout crowds in Winnipeg. While he is a bit upset about missing out on the cup in Boston, Wheeler is using that as motivation to improve his game and take advantage of the increased opportunity offered in Atlanta/Winnipeg. Jets fans can only hope that he is able to sustain his 0.73 points per game average he had with Atlanta, with Winnipeg in 2011-12.

Listen to the audio of the conference call here