So, who exactly is Alexander Burmistrov? 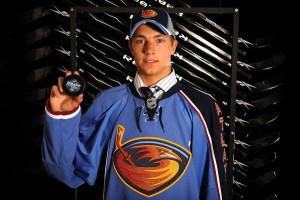 Don’t worry because Illegal Curve is here to help you.

More on Burmistrov after the jump.

Burmistrov hails from Kazan, Russia and simply oozes offensive potential. After starting his career playing for his hometown Ak Bars Russian in the Russian Junior League, Burmistrov came over as an 18-year-old and played for the Barrie Colts, where he registered 22 goals and 43 assists in 62 games while adding 17 points in 16 postseason games as Barrie reached the OHL Finals. Impressed with the slick-skating centre, former Atlanta Thrashers General Manager Rick Dudley drafted him in the top ten of the 2010 NHL Entry Draft and then subsequently signed Burmistrov to a three-year entry level contract last fall.

Burmistrov’s first season in the National Hockey League was inconsistent to say the least but he still managed to show his offensive skill at the professional level. Check out this video of Burmistrov’s highlight reel goal on Washington Capitals goalie Michel Neuvirth last November.

Burmistrov isn`t big for a center (5’11’, 175 lbs.) but he is strong on his skates and reminds me a little bit of Sergei Samsonov. However, he does have an accurate shot. Check out this video of Burmistrov picking the top shelf on Capitals goalie Semyon Varlamov (Burmistrov clearly loves playing the Capitals).


Possessing good speed and an array of one-one-one moves, Burmistrov has the potential to be a Number-1 centre in the NHL one day.

But before we start claiming that we have the second coming of Alexander Ovechkin on our hands, we have to realistically manage our expectations. Burmistrov does have a lot of growing to do as a player and is going to have to learn to play against defenseman much bigger than him. Burmistrov can be intimidated out of going into the corners to get the puck. Moreover, Burmistrov is going to have to use speed wisely as he sometimes overplays the puck and tries to do everything all by himself.

The future does look very bright for Burmistrov though. He will likely start the season centering either the second or third line and will get to play with bigger players such as Nikolai Antropov, Blake Wheeler and Eric Fehr who will give him room to skate and work his offensive magic.

The Jets have a talent here in Burmistrov but fans are going to have to be patient as he doesn’t turn 20 until October. One thing is for sure, Burmistrov’s definitely going to be fun to watch.

News you can use: More on the Ben Maxwell signing
Quick Quotes from Blake Wheeler