This past weekend’s Top 3 Jets prospects come from the AHL’s IceCaps and the OHL Barrie Colts.

This past weekend offered a plethora of choices in terms of high performing Jets prospects. Taking a cue from the parent club, most of the teams that feature prospects had at least mildly successful weekends, with some (Barrie, Swift Current, etc.) running the table against some quality opponents.

The top three were:

Carl Klingberg (St. John’s IceCaps)- My personal favourite prospect had a solid 3-point weekend as the Caps battled Norfolk. Klingberg figured in both goals in a 6-2 loss Friday night (1G, 1A) and added a helper Saturday night as the Baby Jets sunk the Admirals 3-1.  The IceCaps continue to dominate the AHL and are tied for 1st overall in the league with 27 points. 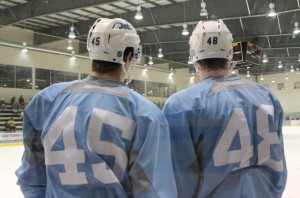 Ivan Telegin and Mark Scheifele (Barrie Colts) – The Colts’ dynamic duo combined for 10 points as the Colts defeated Sudbury, Ottawa and Kingston over the weekend. Kingston has had a tough start but Sudbury is right behind Barrie in the standings, and Ottawa is the East Division leader. Telegin supplied a goal in each of the games versus Sudbury and Ottawa and chipped in with a hat trick against Kingston, while Scheifele had a goal and 4 helpers over the weekend.  The 6 points has helped Barrie keep pace in the competitive OHL Central and they are now within striking distance of first-place Brampton.