A few weeks ago I posted a Prospect Pulse, entitled “Starting Point”, which explored how Illegal Curve would grade each season’s draft/signings.  Since the Jets did not have an opportunity to sign college free-agents this spring, this first grade will be based solely on the draft.  For reference, we have included the grades given to all Canadian teams courtesy of Mark Seidel and North American Central Scouting.

Breaking down the picks made by the Jets, we see that they certainly have a “type” in terms of what they are looking for in a player. Kids with size, character and upside seem to be what the team is looking for, and they stayed true to that formula during this draft.

Player grades after the jump.

The Jets chose the following players:

Mark Scheifele-C (1st round, 7th overall from the Barrie Colts)- The Jets made a bit of a reach pick with Scheifele, in that he was slotted in the middle of the first round by most lists. He put up good numbers on a terrible team (coached by Jets alum Dale Hawerchuk) and is thought to be a kid with good character as well as offensive skills. Was the leading scorer for Canada on the U-18 team. Needs to work on strength and quickness. The Jets obviously liked him, as there were higher rated players available.

Adam Lowry-LW (3rd round, 67th overall from the Swift Current Broncos)- A kid with good pedigree (son of ex-NHL’er Dave Lowry), he also had a brother drafted by the LA Kings. A self-described physical player, Lowry combines grit with some offensive flair and isn’t afraid to fight. One scout we spoke with really liked his determination and willingness to do the little things well to help the team win. Despite missing training camp with mono, he put up respectable numbers with 18 goals, 27 assists and 84 PIMS in 66 games. 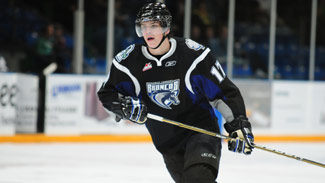 Brennan Serville-D (3rd round, 78th overall from Stouffville of the OJHL, committed to University of Michigan) Serville is also a bit of a reach, in that he was ranked in the 100’s in terms of skaters available. But, like Scheifele, the Jets obviously saw something they liked in this raw defender and moved up to get him. Tall and rangy, he put up decent numbers this season and has represented Canada in the World Junior A Challenge and has played in the CJHL Prospects game. Serville will be tutored by Red Berenson at Michigan, which bodes well for the Jets. I like the aggressiveness the Jets showed in getting Serville.

Zachary Yuen-D (4th round, 119th overall from the Tri-City Americans)- a 6’0, 205 pound defender, Yuen is said to be blessed with acute hockey sense. He played a big role on a successful Americans team as a 17-year old, and followed that up with a very good 2010-11, putting up 32 points from the blue-line. He plays a game that trends toward the shut-down role, but can contribute offensively as well. I heard it suggested that one of the reasons why his stock fell is that he is a little short for a shut down guy (seems spurious, at best) and that he doesn’t do any one thing extremely well. 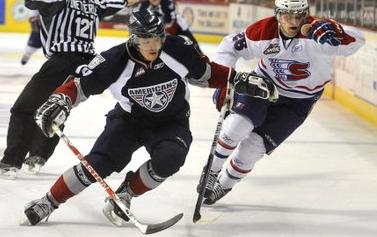 Austen Brassard-RW (5th round, 149th overall from the Belleville Bulls) Going back to Ontario, the Jets picked up a right-winger once thought to be a potential first-round selection due to his early selection in the OHL. A slow start and a poor team meant that he put up only 34 points this year, and despite being the 64th-ranked North American skater, he fell to the 5th round. That said, Brassard has good potential and the Jets may have a steal on their hands. He has size and can play a high-energy game.

Jason Kasdorf-G (6th round, 157th overall from the Portage Terriers of the MJHL) Not exactly known for producing NHL’ers, the Terriers did supply this tall goaltender to the home-town Jets. Kasdorf is committed to RPI, where he will play under the highly-respected Seth Appert. The Illegal Curve crew met him and his family on the street, and they are very nice people. I don’t know much about his game other than that he took Portage to the Anavet and Royal Bank Cups this past spring. Likely a project goalie at this point, but he has the right frame and attitude to succeed.

Aaron Harstad-D (7th round, 187th overall from the Green Bay Gamblers of the USHL) Green Bay has had a respected program for many years, which is a good sign for Harstad. The word from the USHL people is that he is a stay-at-home type defender with good size (6’2, 187) and a bit of a mean streak. He does have some issues surrounding his work ethic, but is committed to Colorado College. I peg him as a draft and follow sort of player.

The Winnipeg Jets made seven selections in all, including one first-rounder and two players in the third round. In reviewing these picks, we see that they made two “reach” picks and have three potential steals in Brassard, Yuen and Kasdorf. As I tweeted during the draft, I feel that the current crop of players should start with a B- grade.

There is no obvious game breaker in the group, and no one in the later rounds seems like an obvious bet to overachieve. That said, the Jets were very true to their word in terms of what they were looking for, and obviously went after players they wanted with some gusto. I am reluctant to give too high of mark due to my years of watching the Oilers make reach picks in the first round (Mikhnov, Niinimaki, Pouliot, etc.) and having the experiments fail. I  hope Scheifele turns into a top-6 forward, but its too early to tell.

The decision to not retain Rick Dudley or Head Scout Dan Marr caused us concern because we weren’t sure where the scouting information was going to come from but it became very obvious that Craig Heisinger and Kevin Cheveldayoff had been doing their home work because they went off the board and selected a big time favourite of ours, Mark Scheifele from the Barrie Colts. Scheifele was arguably Canada’s best player at the Under 18 World Championships and the Jets may have gotten some inside information from Scheifele’s Coach/GM in Barrie and Winnipeg’s biggest superstar ever, Dale Hawerchuk. The Jets didn’t have a 2nd round pick but their two 3rdround picks represented 2nd round value in the huge defender from Swift Current, Adam Lowry and the future NCAA superstar, Brennan Serville. In the 4th round, we think the Jets got the absolute best value of the entire draft with Zach Yuen from the Tri-City Americans. At NACS, we had Yuen ranked #52 overall and think he has a chance to become a very good NHL defender and for the Jets to trade up to #119 to get him, it showed a vision and competence that bodes very well for the fans of the Jets. They finished the weekend off with another great value in the burgeoning power forward, Austin Brassard at #149 from the Belleville Bulls. Their last 2 picks followed the pattern they established early in the Draft that they wanted sized prospects that were excellent value and despite it being Cheveldayoff and Heisinger’s first NHL Draft, they showed they were prepared and took almost every other team to school, which was very impressive.