Interestingly, the Winnipeg Hockey Club has a couple of former 7th round draft choices on the cusp of making the NHL. One is the recently profiled Arturs Kulda, and the other is Paul Postma, the focus of this Prospect Pulse. 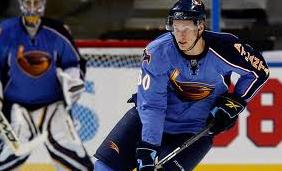 Postma figures to fit in on the opposite end of the spectrum as Kulda, as the former Western Leaguer (Swift Current, Calgary) is an offensive-prototype defenseman. A smooth and swift skater, Postma sees the ice well and has been able to post steadily increasing offensive numbers since his 16 year old season with Swift Current of the WHL, highlighted by an 84 point campaign with the Calgary Hitmen and a 45 point outing with the Chicago Wolves last season.

Calling once again on two former coaches, both noted that Postma has good vision and is very good on the power-play and is equally comfortable shooting and passing the puck. He is able to use his speed and skating to set the tone of the play and to get out of trouble when need be.

The negatives to his game are common with young defensemen, in that he can be somewhat lackadaisical with the puck, especially in his own end, and tends to overplay the puck on occasion.  His physical stature is likely a negative at this point, standing 6’3 but weighing only 175lbs.  That obviously makes for a lanky-type defender, but one that needs to add weight to win the battles at the NHL level.  Both coaches I spoke to noted that he is easily separated from the puck and often loses front-of-net battles. 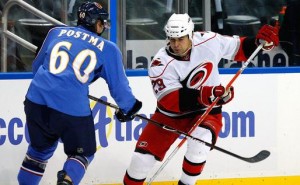 Despite the negatives to his game, Postma is still only 22 years old and has already played a game in the NHL.  I would expect he stays at the American League level this season, but could be a call up if the Winnipeg club needs a power-play specialist (someone like Marc-Andre Bergeron) at the NHL level.