In perusing the list of former Atlanta Thrashers prospects, one of the likely candidates to make the jump to the big club in Winnipeg is Arturs Kulda. 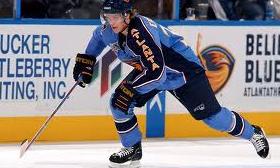 The Latvian defender and former Peterborough Pete (and 7th round NHL draft choice) most likely figures to be a physical blueline presence that looks after his own end first, but can also make an offensive contribution by way of his heavy shot.

Prospect Pulse had the opportunity to speak to a current NHL assistant coach as well as a former AHL assistant coach, and the recurring theme to their discussions of Kulda was his “rawness”.   He can make and take a pass, can get his big shot off in a hurry, but is still a little unsure as to where to be in defensive zone coverage and will often make mistakes by erring on the side of being cautious, which leads to him getting caught in “no-man’s land” situations.

That said, he obviously has some defensive bonafides, as he managed to keep his plus/minus to a respectable -2 on a Chicago Wolves team that gave up more goals than it scored. Kulda did post a stunning +46 in 2009-10, but he happened to be paired with future Hall of Famer Chris Chelios. 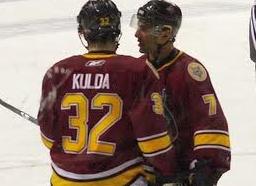 A solid 6’2’ and 200 pounds, Arturs Kulda is a punishing hitter who the above-mentioned coaches figure will be used as a shut-down 3 or 4 type in the NHL.  Depending on who ends up on the Winnipeg blueline, he could also be called upon to employ his big shot on the power-play.  He has improved over each of his seven seasons in North America, and the people I spoke to believe he can step into Winnipeg’s lineup if he has a successful summer of training.

Let us know which prospects you’d like more info on for our Prospect Pulse series.