Projecting the Winnipeg Jets line combinations for the 2013 Regular Season

Ez takes a look at some possible line combinations for your 2013 Winnipeg Jets.

With training camp set to begin in the coming days (as early as this Sunday, January 12th we’re told) and the abbreviated 2013 NHL Regular Season set to begin in just over a week, Illegal Curve feels the time is now to look at the possible line combinations for this year’s edition of your Winnipeg Jets. 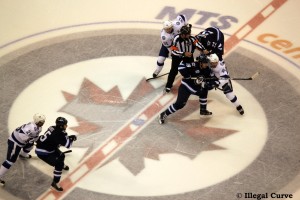 Firstly, let’s review the key additions and subtractions that were made by Winnipeg this past offseason.

Editor’s Note: In projecting this year’s Winnipeg Jets line combinations, it should be noted that they are simply the opinions of the writer and the line combinations will invariably change throughout the course of the season.

Having said all that, let’s start by projecting the Jets forward line combinations.

In my opinion (and I’m surely not the only one),  the most important move the Jets made this past offseason was signing 34-year-old Finnish centre Olli Jokinen to a two year/$9 million contract. Jokinen, who scored 23 goals and 38 assists for the Calgary Flames last season, instantly becomes the Jets number-1 centre and gives the team a proven scoring threat. With all due respect to Bryan Little, Jokinen is more offensively talented and his size gives the Jets a much needed physical presence up the middle.

Rationale: For both Line 1 combinations, I have slotted Jokinen on the top line with Blake Wheeler on the right side. However, as we discussed during the summer on The Illegal Curve Hockey Show on TSN 1290, the Left and Right Wing positions on the top line are by no means set in stone. It is clear that Evander Kane is the most talented Left Winger on the team but it is quite possible that a North/South player like Kane will not mix with a North/South player like Jokinen, who is also not a natural playmaker. Therefore, my second scenario is to put Captain Andrew Ladd on the top line with Jokinen. Should Coach Claude Noel decide to put Kane on the second line….Line 1/Combination 2 becomes:Ladd-Jokinen- Wheeler

Rationale: The second line is the most intriguing to me and obviously depends on who plays left on the top line, Kane or Ladd. For all Line 2 scenarios, I have put Bryan Little as the centre, but as far I am concerned the wing positions are both very much up in the air.

Rationale: As you can see Jimmy Slater has the third line center role locked up. Slater can win face-offs, kill penalties, score a few goals (13 last season) and even drop the gloves. The only way I see Slater not playing center on the 3rd line is if Noel decides he wants Burmistrov or Antropov centering the third line which means Slater would bump down to the 4th line. Ponikarovsky, on the other hand, gives the Jets a little more offense on the 3rd line than Tanner Glass offered last season.  The Right Wing spot depends a lot on who wins the second line role, but expect Wellwood and Antropov to share the role while Spencer Machacek will be asked to chip in occasionally throughout the season.

Rationale: As you can tell, I have Chris Thorburn locked in as the 4th line Left Winger. Even though Thoburn played significant time on the 3rd line last year (GST Line with Slater and Tanner Glass) he is better suited for a 4th line role. The only possible reason Thorburn won’t be on the 4th line is if he spends some time on the 3rd line or Claude Noel decides to give either Ivan Telegin or Ben Maxwell some time on the 4th line as a call-up. In regards to the center spot, Alex Burmistrov is currently pencilled in as the number-1 option for Coach Claude Noel, although I believe he would be better served on one of the top-3 lines. I have put Patrice Cormier as an option at center but he will most likely spend the majority of the year playing for St.John’s in the American Hockey League. The wild card here is at Right Wing. To me, Antti Miettinen has the advantage over Spencer Machacek on the 4th line because of his experience and two-way ability but I do believe Machacek will get an increased look in Winnipeg this year (20-30 games maybe).

It should be noted here that I have not included  2011 1st Round Draft Pick Mark Scheifele in any of the line combinations. I don’t believe he will start the season playing for the Jets and instead believe he will continue to play for the Barrie Colts of the Ontario Hockey League.

Rationale: There is only one scenario here for the top Jets D-Pairing. Big Buff and Enstrom played almost all of last year together and will once again be Winnipeg’s number-1 defense pairing this season.

Pairing 2/ Combination 1
*While Zach Bogosian recovers from his injury

Rationale: Zach Bogosian is still recovering from off-season wrist surgery and is not expected to be back in game action until late February so for now, the only certainty is that Ron Hainsey will be one of the second pairing defensemen. My money is on Mark Stuart joining Hainsey. The two American defensemen played together last year and Stuart’s defense-first game complements Hainsey’s offensive skills, although Hainsey has improved the defensive side of his game over the years.  Although I think Postma will be considered as an option, he is still inexperienced and that’s why I believe Stuart gets the edge.

Rationale: We know Grant Clitsome is going to be a mainstay on the 3rd defense pairing for the Jets (why Randy Jones was expendable in the offseason) so it will be between Mark Stuart and Paul Postma for who will play with Clitsome. My best bet to start the season is Paul Postma, who was signed to a one-way contract during the offseason. When Bogosian returns from injury, expect Postma to fight with Clitsome for the 6th defenseman spot.  The number-1 option to replace either Postma or Clitsome as the 6/7 defenseman will be Winnipeg native Derek Meech.

It should be noted that although Zach Redmond is off to a good start with the St.John’s IceCaps of the AHL this season, he is on a two-way contract and is probably better served to stay in St.John’s for most of the year, similar to Derek Meech.

What do you think? Do you completely disagree with me? Am I out of my mind? Let us know in the comments section….
Related TopicsHockeyNHLWinnipeg JetsWinnipeg Jets 2013 Line combinations