With the NHL Entry Draft approaching so quickly. the big talk in Winnipeg is the ninth overall pick. While not all drafts are created equal, I thought it would be interesting to see the types of players who have been selected at nine in the past.

Here are the last twelve ninth overall picks, quite a wide range of talent has been taken at that slot since the year 2000.

At least this year’s draft picks will be able to put on an official Winnipeg Jets jersey, rather than a black jersey with the NHL shield.

The Hockey News: Busy Canadian teams. Lyle Richardson comments on the Evander Kane rumors that have been swirling since the weekend. At Illegal Curve, we’re not sure how valid they are, yesterday Kane’s agent said that they will be negotiating with the Jets at the draft this weekend.

Welcome to the Barnstormer: Waiting for Morris Lukowich. A fan re-lives his memories of the Winnipeg Jets 1.0 (hat tip @ICDave)

Illegal Curve: For all your draft preview needs, listen to Saturday’s edition of the Illegal Curve Hockey Show. Our “Draft Preview” episode is a great primer to get you ready for the NHL Draft, our guests, Craig Button (TSN), Grant Sonier (ESPN) and Corey Pronman (Hockey Prospectus) provide great insight on all of the potential draftees.

Empty Netters: Penguins have avoided Europe in the draft under Shero. A very nice table in this article illustrating the frequency of teams selecting European players since 2006. The Blues are first, selecting 17 of 35 players from Europe, the Islanders are second with 17 of 52 picks being European. The Sabres have picked the least European players since 2006 with only 4 of their 43 picks being European. The Thrashers/Jets are near the bottom with 9 of 44.With only one season under his belt, it is difficult to get a read of Jets management’s tendencies but they did not select a European player at last years draft (seven picks).


The Hockey Writers: Latest Mock Draft. For what it’s worth, they have the Jets taking Bendan Gaunce, a centre from Belleville of the OHL.

Sportsnet.ca: Diamonds in the rough: NHL Entry Draft steals. You don’t need a top pick to select a superstar. This is a list full of All-Stars and Hall of Famers who were taken late in the draft. Sometimes the most important picks are made at the end.

The OC Register: Report: Selanne planning return to Ducks. According to a Finnish publication, Selanne plans to return this season. If the Ducks come to Winnipeg again, will he get a similar ovation? The media surrounding that event was ridiculous, re listen to the pre-game, and post game press conferences. At the level he is playing at, he should give it “one more year”.

Detroit Free Press: Red Wings sign Darren Helm to four-year deal. He’ll get $8.5 million over the next four years. I must say that I love seeing that sign on the highway “Welcome to St. Andrews, home of Stanley Cup Champion Darren Helm.” My cousin visiting from out of town last month was really impressed. (image courtesy of www.canhighways.com). 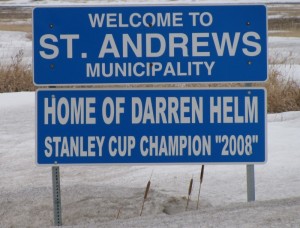 Edmonton Journal: Oilers sign Lennart Petrell to one-year extension. In the Cult of Hockey Poll, 78.4% of voters said they were happy with the Oilers bringing back Petrell. The 28 year old had nine points in sixty games last seaosn, two of those coming in the one game the Oilers played against the Jets.

The Hockey News: Analyzing Rick Nash’s six suitors. Ken Campbell has it down to the Rangers, Sharks, Flyers, Bruins, Leafs, and Hurricanes.