Reminder: Tune in to TSN Radio 1290 tomorrow at noon for the Illegal Curve Hockey Show. 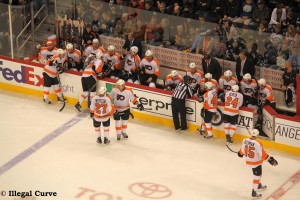 Columbus Dispatch: Bobrovsky dealt to Blue Jackets. The Jackets acquired the Flyers goaltender for a second round pick, and a fourth round pick this season and another fourth round pick next season. Steve Mason has sputtered since winning the Calder Trophy as the NHL’s top rookie in 2008-09. Bobrovsky was stuck behind Ilya Bryzgalov’s massive contract in Philadelphia and has shown that he has hte ability to start. This is definitely an upgrade over last years Steve Mason/Curtis Sanford tandem.

CSN Philly: Bobrovsky traded to the Blue Jackets for picks. From the Flyers point of view, they only had five picks in the seven rounds of the draft, now they have seven picks this year. They had traded away two second round picks during the season to acquire Niklas Grossman and Pavel Kubina. While the Flyers currently don’t have a backup to Ilya Bryzgalov (we know they’ll need one), CSN’s Tim Pannacio thinks veterans Marty Biron, Scott Clemmensen and Johan Hedberg would be a good fit.

Philly.com: Who will back up Bryz? Frank Servalli thinks the Flyers should acquire Brian Boucher, currently under contract with the Carolina Hurricanes. Flyer fans have to be nervous about their goaltending situation next season.

Ottawa Citizen: Ottawa Senators still pursuing Nash. The Sens and the Sharks are both making a play for Rick Nash, the Sharks have offered Ryane Clowe, Joe Pavelski, Jason Demers and a first round pick. While the Sens have offered Robin Lehner and last years first round pick Mika Zibanejad. Allen Panzeri also mentions that Nick Foligno and Ben Bishop’s names have been thrown around as well. If I’m Scott Howson, I’d take the deal from the Sharks.

NESN: Rick Nash trade wouldn’t make sense for most teams given risk of such a deal. Ricky Doyle thinks that Nash’s cap hit at $7.8 million is just too much to give away top prospects like Tyler Seguin or Dougie Hamilton in exchange. After seeing how well the Flyers did from trading Jeff Carter and Mike Richards last year (even if they didn’t go as far in the playoffs, they received a nice haul for those to players) teams may be reluctant to give up a huge package for the 28 year old Nash. We had a debate with some friends on twitter last week, if you were the Jets, would you trade Evander Kane for Rick Nash, it took me less than a second to say no.

Boston Globe: Tim Thomas waives no-movement clause. The clause was set to expire on July 1, this allows the Bruins to trade him earlier. Thomas is due $3 million next season, while at a cap hit of $5 million. Fluto Shinzawa reports that teams near the cap floor are looking to acquire him to boost the cap number. He suggests Colorado, Nashville and Phoenix as potential suitors due to their current salary level. This time last year Thomas was a Conn Smythe winner and at the top of the NHL, now he’s on his way out of Boston. How the mighty have fallen.

NESN: Tim Thomas waives no-trade clause, could give Bruins chance to dump goalies contract.Nick Kypreos reports (@RealKyper) that Thomas still intends to sit out next season. I still don’t think he’ll sit out, it really makes no sense at all. But then again, not visiting the White House didn’t make any sense, so we shouldn’t be surprised.

Mark Spector (@SportsnetSpec): “If Oilers can get Subban, they may have to send a Petry or Smid Montreal’s way, and perhaps 32nd pick as well.”

After hearing through the weekend that it was likely the Oilers would hang on to their number one pick, the rumors heat up with only hours until draft time.

The Canadian Press: NHLPA expects to start CBA talks next week. Lets get this done as quick and painlessly as possible, nobody wants next years hockey season to be in peril. (We all know this will be anything but quick and painless)