On the Farm: Are the IceCaps using Cormier properly?

Our eyes on the East Coast, Ryan Fancey takes a look at the arrested development of Patrice Cormier.

Something I’ve noticed since the beginning of the IceCaps season is how much I’m simply looking around the ice to find Patrice Cormier.

Well, to be quite honest, Cormier was a name I immediately recognized when I found out that St. John’s would be housing many of the Jets’ players in waiting. He’s been touted as one of their top prospects, and for good reason. 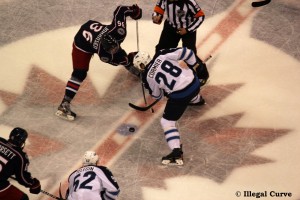 Despite his troubles in the past with on-ice behavior, Cormier did captain the Canadian World Junior team in 2010, which really threw him into the spotlight for many. He remains a player that fits the mold of an ideal checking center who can potentially become more of a threat as a power forward down the road. That’s why I’m so puzzled by his play (or lack thereof) as an IceCap.

Through 19 games this season, Cormier has only managed 5 points on a team that’s tops in the AHL. He’s been used on the penalty kill fairly consistently, but his play in other situations seems limited.

For a guy looking to develop his skills and reach the big stage, this has to be frustrating. He does see some minutes with offensive players like Klingberg and Mahachek from time to time, but is often slotted behind Holzapfel and Rosa down the middle. Some nights I’ve even seen Garth Murray log more time it seems.

It’s a tough pill to swallow because it seems that this team lacks punch in terms of aggressiveness, and Cormier often delivers that when on the ice. Last weekend things became a little chippy between the Caps and Admirals, so Cormier decided to lay a thunderous hit and responded when asked to fight immediately after.

Fast forward one week and Cormier gets completely crushed by Kyle Neuber of the Toronto Marlies. Who’s there to respond? Nobody. It should be noted that his ice-time did seem to increase against Toronto, likely because they boast such a tough team, but I still want to see more.

It’s just my opinion, and maybe I’m a little off base. But I think it’s in the Jets’ best interest to see as much as possible from this kid.

Cormier sees some tough assignments, as is evidenced by his minus six rating, but it doesn’t seem like he’s rewarded for it.

Cormier is an exciting young player, and it would be a shame for him to not reach full potential.