The Winnipeg Jets will look to extend their one-game home winning streak when they welcome the New Jersey Devils to the MTS Centre tonight (6:00 p.m.). Only two players remain with the Devils from the team that last played in Winnipeg back on December 29th, 1995 (a 5-3 Jets win). Any guesses as to who those Devils players are? 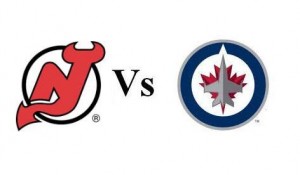 The Story:  Two down. Three to go.

The Winnipeg Jets will look to extend their one-game home winning streak when they welcome the New Jersey Devils to the MTS Centre tonight (6:00 p.m.).

The Jets defeated the Phoenix Coyotes 1-0 Thursday night to get back to .500 on their current five-game home stand in what was the team’s most impressive defensive performance of the year. Goaltender Ondrej Pavelec was the Jets’ first, second and third star of the game on Thursday, making 33 saves and proving yet again that he has elite, game-stealing ability. Jets center Bryan Little scored the game’s only goal (his 7th of the season) and the Jets temporarily erased the memory of Tuesday’s 6-4 loss to the Ottawa Senators that started their home stand.

The Jets will face a slumping New Jersey Devils team tonight (three losses in a row) that was defeated 4-2 by the surging Minnesota Wild last night. Devils future Hall of Fame goaltender Martin Brodeur was pulled less than 10 minutes into that game after allowing three goals on four shots and the Devils couldn’t recover as they continued their slide down the Eastern Conference Standings.

The Devils have a myriad of problems right now as the team isn’t scoring on a consistent basis (55 goals, 27th in the NHL) and team defense has seemingly never been worse, except for last year maybe when the Devils started the season with 10 wins in their first 41 games. The $100 million man Ilya Kovalchuk scored only his 6th goal of the season last night and Zach Parise has gotten off to a slow start after missing most of last year with a  knee injury.

The bright spot for the Devils so far this year has been the play of their rookies, Adam Larsson and Adam Henrique. Henrique is second on the Devils in points (five goals and 10 assists) while Larsson (2011 4th overall pick) has logged big-time minutes for the Devils and has looked matured beyond his age. The last time the Jets played the Devils, back on November 5th, Henrique scored two goals, including the winner in overtime.

The Jets will be looking to carry their performance from Thursday’s game to tonight’s meeting with the Devils. Head Coach Claude Noel was happy with the way his team maintained a lead versus Phoenix but he knows his team has a tendency to play the Jekkyl and Hyde act. Noel will surely be looking for a more aggressive 5-on-5  effort from the Jets tonight as the Jets spent most of the third period Thursday trying to hold on for dear life.

Jets Lines will be the same as last game with Ondrej Pavelec getting the start.  The Devils did not practice this morning so the lines are suspected to remain the same as last night against the Wild.

NOTES…..Jets forwards Eric Fehr and Nikolai Antropov are both nursing nagging injuries and won’t play for the Jets tonight…..Jets forward Carl Klingberg had 5:22 of icetime in his season debut on Thursday against the Coyotes. He did not register any points or shots on net….. The Devils defensemen have combined for only five goals this season. Mark Fayne leads all blueliners with three goals…..Jets defenseman Randy Jones was at Jets practice Friday at the MTS Iceplex wearing a red “no-contact” jersey. He is still some time away from returning to game action. Jones has been out since November 5th…..Only two players remain with the Devils from the team that last played in Winnipeg back on December 29th, 1995 (a 5-3 Jets win).  Any guesses as to who those Devils players are?