Being a first year head coach isn’t an easy task, it takes time to come in to a new team, gain the players trust, learn how to manage them, and understand what each person brings to the table. IC’s Richard Pollock commented on this in his earlier article “Noel getting to know Jets, just as fans are“.

Coach Noel has shown that the first five games were a bit of a “feeling out” process. The ice-time statstics from the last five games demonstrate that he is learning the individual skills of each player and adjusting his coaching strategies accordingly.

By examining the game-by-game time on-ice trends for each player, it is clear Noel has begun to shift players into defined roles.

By viewing the ice-time trends, we should be able to expect more consistency in terms of the special teams unit Noel decides to employ going forward.

Here is a game-by-game spreadsheet for time on ice on the penalty kill for each player:

Note: Keep in mind that not each game is equal as the time available for special teams play depends on the number of penalties handed out–so, context matters. 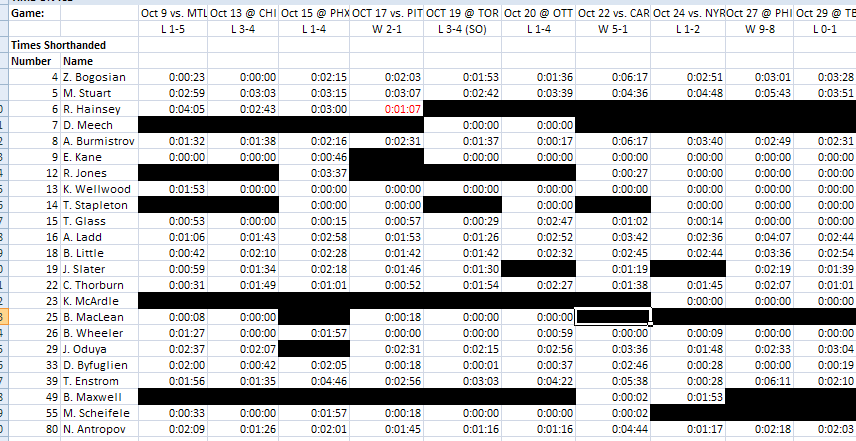 -The horses on the team’s penalty kill on defense are Stuart, Enstrom, Bogosian, Oduya.

-In the last three games, Dustin Byfuglien has barely been used on the penalty kill, after getting some time in the first few games.

-After receiving some time on the penalty kill in the first five games, Blake Wheeler has been on the ice for just over a minute while shorthanded in the last five games.

-Jets forwards consistently being employed on the penalty kill have been Ladd/Little, Slater/Thorburn, Burmistrov/Antropov. No other forwards have stepped on the ice for a penalty kill in the last few games. This is compared to the first five where, Glass, Kane, Wheeler, Scheifele, Wellwood, all received some time on the penalty kill.

Here is the powerplay ice-time per game for each player 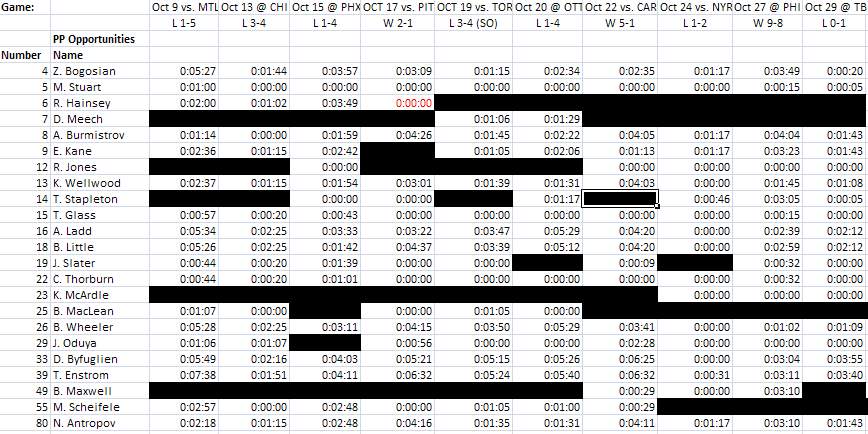 -Both games Derek Meech has been in the lineup, he has gotten some powerplay time; he didn’t get any time on the penalty kill during those games. His replacement, Randy Jones, only plays at even strength.

-The GST Line had each received some power play time in the first five games, however, the trio has been used sparingly on the powerplay since.

-Since Mark Scheifele was sent down to Barrie, Noel has spread his powerplay icetime among the top seven forwards (Little, Wheeler, Kane, Antropov, Burmistrov, and Wellwood).

-Johnny Oduya’s powerplay time has dropped in the last few games. In some games, Tim Stapleton has been used on the point, we’ll keep an eye on this going forward.

-Evander Kane’s ice-time is steadily increasing from the first five games. He received a season high 19:36 minutes in Tampa Bay. He hasn’t been getting any time on the penalty kill, and his ice time will dip if the Jets continue to take penalties at will.

-Bryan Little’s average ice-time has increased from the first five games (18:54) to the last five (21:27).  Will he continue to get this much ice-time at his current level of production? (Only three points in ten games). The same can be said about Andrew Ladd–although he has been more impressive. Hopefully these two can break out of their slow start.

-One story that hasn’t been given enough attention is Ron Hainsey’s injury. He plays in all situations logging big minutes on the back-end, averaging just over 21:00 minutes in the three full games that he played prior to incurring his injury. While Mark Stuart has stepped up in his absence, their talents differ considerably and Hainsey’s puck-moving from the blue line has certainly been missed.

If you have any thoughts on the teams’ icetime distribution, post it in the comments.