The Jets trick or treat their way to south Florida to take on the Florida Panthers. 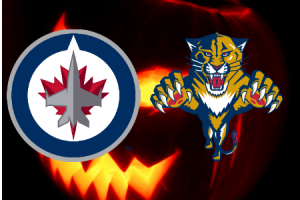 The Story: It won’t be trick-or-treat for the Winnipeg Jets against the Florida Panthers tonight, it will be win or else. The Jets dropped a 1-0 decision to the Tampa Bay Lightning on Saturday night in a game that was a complete contrast to the Jets game last Thursday in which they scored at will in a 9-8 road victory over the Philadelphia Flyers. The Jets played a more fluid game against the Lightning but obviously could not muster anything offensively, despite outshooting the Lightning 28-27. The reunited top line of Andrew Ladd, Bryan Little and Blake Wheeler had one of their best games of the season despite not registering any points and the line was more physical than in previous games and has shown that they are willing to drive the net and get more goals in the so-called “dirty” areas.

The play of Jets goaltender Ondrej Pavelec was also much improved in Saturday’s game against Tampa. Pavelec has struggled all year with his confidence and rebound control but on Saturday night, he made several difficult saves and kept the game close when the Jets were hemmed in their zone (a second period save against Vincent Lecavalier at point blank range stands out as one of his finest saves. Pavelec earned third star in the game). Coach Claude Noel probably wasn’t happy with not getting any points in Tampa but he must have been happy that the Jets played a smarter, more disciplined game against Tampa.

Transitioning to the Panthers (6-4-0), who defeated the Buffalo Sabres 3-2 on the road Saturday night, the story of the season thus far has been the play of the team’s young stars and off-season acquisitions. The Panthers were one of the busiest teams- if not the busiest team- in the National Hockey League this past summer, bringing in Kris Versteeg, Tomas Kopecky, Scottie Upshall, Tomas Fleischmann, Brian Campbell and Ed Jovanovski in what was essentially a massive overhaul.

The moves have turned out well so far as Versteeg is among the NHL’s points leaders with 11 points (5 goals and 6 assists ) in 10 games while Campbell leads all Panthers defensemen with 9 points (no goals, 9 assists) in 10 games. Fleischmann,Kopecky, Upshall and Jovanovski have all been healthy this season and have also contributed to the team’s success thus far.

The tale of Florida’s rookies and young stars has been remarkable this season and is probably the bigger story. The Panthers have been using their young players on a regular basis this season (rookie Erik Gudbranson has played in all 10 games, Jacob Markstrom has started 4 games and 21-year-old defenseman Dmitry Kulikov has played in all 10 games). The 19-year-old (2010 3rd overall pick) Gudbranson has not registered a point yet but the Panthers are happy with the way he’s played defensively and believe he is physically capable of staying and competing on a nightly basis in the NHL. Markstrom, the future of the Panthers in net, is only in the line-up because Panthers back-up goaltender Scott Clemmensen is injured. Markstrom has won two games and has made the Panthers decision whether or not to send him down to the American Hockey League when Clemmensen returns a difficult one.

The key for the Jets against the Panthers tonight will be establishing a strong forecheck early and capitalizing on scoring opportunities. The Jets will have extra motivation for a win against a Southeast Division opponent (1-1 against Southeast Division opponents this season) who they will play six times this season, including on November 10th in Winnipeg. Illegal Curve will continue to say this all year long: The Jets are going to have to outwork their opponents tonight and every night as they are not blessed with very many natural goal scorers.

Notes….LW Mikael Samuelsson, acquired last weekend from the Vancouver Canucks, has not yet played for the Panthers. Samuelsson will not play tonight and his return is unknown at this point as he is recovering from sports hernia surgery from last May…. Marco Sturm will be in the line-up for the Panthers tonight. He was the other player acquired from the Panthers in a trade that sent forwards David Booth and Steven Reinprecht to Vancouver. Sturm has no points in three games with Florida…..According to George Richards of the Miami Herald, Jose Thoedore will play in net for the Panthers tonight and Brian Munz of TSN is reporting that Ondrej Pavelec will start for the Jets.