No Rampage in Manitoba as Moose beat San Antonio 4-1 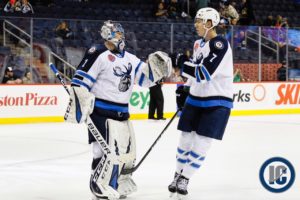 The Moose put in a hard week of practice and it showed tonight as they had a pretty solid 60 minute effort.  Both goalies (Eric Comrie for the Moose and Ville Husso for the Rampage) played well in the first 40 minutes of this game with each netminder only allowing one goal while stopping 28 (Comrie) and 18 (Husso) shots respectively.  Manitoba broke things open in the final frame thanks to Jansen Harkins scoring the game winner on the power play followed by a nifty CJ Suess goal and JC Lipon’s second of the game into the empty net to seal the deal.  The Moose improved to 2-3 on the season.

– Michael Spacek had to return to the Czech Republic to deal with a family matter;
– Logan Stanley returned from injury after he blocked a shot in the first game of the season;
– Jansen Harkins moved back to centre (a position he played a lot in junior);
– Kristian Vesalainen made his AHL debut after being assigned by the Jets this morning.

Sunday, October 21 at Bell MTS Place re-match against the San Antonio Rampage, the AHL affiliate of the St. Louis Blues at 2 pm.