Ohlund says incident with Koivu old news; Canucks can’t get it done on the road; Sutter happy with Flames; Should Sharks re-sign Marleau; Minor league coach has meltdown; NHL GM’s come up with plan to address head shots; Is Owen Nolan Hall of Fame bound? These stories and more after the jump.

Here is tonight’s word from around the blogs:

Since today is Remembrance Day, I wanted to point out an excellent article that Joe Pelletier of Greatest Hockey Legends wrote titled ‘Lest We Forget: Bob Carse – Hockey’s POW‘ which is a must read.

There were many examples of hockey players who thought nothing of giving up their dreams and sometimes their lives to fight for the freedom that we so often take for granted.  In addition to Joe’s excellent article a player that I personally met and had the good fortune to talk with on a number of occassions was Winnipeg’s own Pete Langelle whose hockey career is most notable for;

In the greatest rally in hockey history the Toronto Maple Leafs came back from a three game to none deficit to the Detroit Red Wings to win the 1942 series. In a momentous Game Seven, played at Maple Leaf Gardens, the Leafs roared back to win the Stanley Cup, with Pete Langelle scoring the Stanley Cup-winning goal. His goal, Toronto’s second in a 3-1 win, was scored at 9:48 of the third period, assisted by Bob Goldham and his old teammate with the Winnipeg Monarchs, Johnny McCreedy.

Not only was this the biggest goal of his life, but it was also the last goal he scored in the NHL as he joined the Royal Canadian Air Force and never played NHL hockey again as upon his return, the Leafs roster was full. 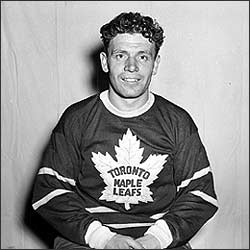 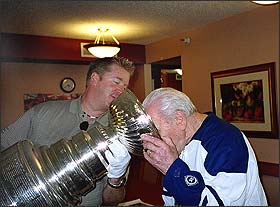