Are the Sedin twins standing on the edge of greatness? Will Cliff Fletcher’s efforts be enough in Minnesota? Are the Senators this season’s biggest wildcard? These stories and a Streaker after the jump.

Some news and notes from across the blogs:

Unrelated to hockey, I attended tonight’s Detroit Tigers vs. Kansas City Royals and saw something I had never seen in all my years of baseball attendance and have to admit that it spruced up an 11-1 Royals drubbing of the Tigers.  Perhaps in blowout hockey games, the NHL could start incorporating this as a feature to excite the crowd.  Without further adieu, I present to you the Comerica Streaker:


And there goes the Comerica streaker…….we hardly knew thee. 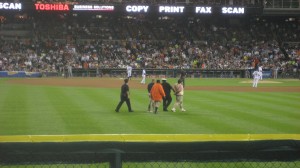 Nightly Hockey Hits: The best hockey video game review you will ever read, Ray Emery gets some advice from Smokin’ Joe Frazier, Are fans, scalpers ready for dynamic ticket pricing?
Nightly Hockey Hits: Why Evander Kane Should Play in the NHL, Coyotes fail to draw a crowd, Ever wonder how GM’s make a trade?