In this constantly evolving environment the NHL provides players with a new directive. 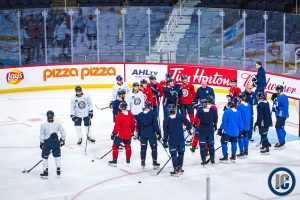 The National Hockey League has provided players with a new directive in regards to the suspended season. Via Chris Johnston of Sportsnet we learn:

The NHL has issued new directives to players: They are permitted to go home, to any country, and must stay in self-quarantine until the end of March once they get there.

This would really amount to a month because presumably players would need to self-quarantine once they got back to the city where they play NHL hockey, unless this is all over by end of March and that is not what health experts have suggested.  So really if I am reading this right it is essentially saying that there will be no hockey until at least mid April.

That would appear to be confirmed by the follow-up tweet by Chris saying:

This is a significant change from NHL’s previous to return-to-play plan. As part of this new directive, it sounds like the league hopes to re-open camps in late April.

There you go.  End of April.  And that seems to be a best case scenario.

Elliotte Friedman, also of Sportsnet, adds this from the NHL:

“Our objective will be that, in addition to continuing regular updates, we will be able to provide high-level guidance on potential of opening a training camp period roughly 45 days into the 60-day period covered by the CDC’s directive.”

This would basically mean end of April they are hoping for a training camp and then re-start the season in mid May.  Still seems ambitious.