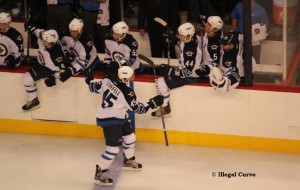 Note 1: Stay tuned to www.illegalcurve.com and @illegalcurve on Twitter for the latest reports from the Prudential Centre in New Jersey. Richard Pollock, Ezra Ginsburg, and Dave Minuk are live at the arena, and will be filing reports of any news, analysis, and interviews throughout the day, from pick number 1 to pick 211.

The Jets Have the Picks, How Will They Use Them?—Draft picks? Trade chips? The Jets have a lot of assets and options for today’s NHL Draft.

Jets Crossing their T’s and Dotting their I’s—Jets spent yesterday conducting some final player interviews. The question now is will the draft unfold to their liking, and will their player, whomever he is, be there for them at number 13?

A Scary Situation that Could Have Been a Lot Worse–Aside from a minor cut above his eye, he is OK, but a scary incident, no doubt.

Pulock a Projected First Round Pick—A look at the Brandon Wheat Kings defenseman, who is projected to go somewhere in the latter half of the first round

Five Players the Jets May Have Their Eyes On—Will the Jets go with a familiar name, or is there someone under the radar that they are targeting?

The Glow of Jacob Trouba is Still Strong—A look back at last year’s first round selection, a steal in most people’s eyes, one year later. 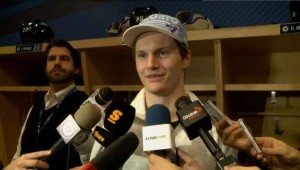 Jets UFA’s in a State of Limbo—The Jets would consider re-signing some of the UFA players from last year’s team, but it is more than likely that the majority will be signing elsewhere when free-agency opens next Friday.

Jets Have the Ammunition, How Will They Use It?—Six picks in the first three round puts the Jets in a position of strength for today’s draft

A Marathon Draft Day, not a 100 M Sprint—With everything being compacted into one afternoon and evening in New Jersey, all hands must be on deck, and all the Jets’ decision makers must be on the same page.

Hockey’s Future Jets Draft Preview—Our friends at Hockey’s Future look at the Jets organization, draft history, and who they could be targeting today

Canucks Considering Trading Schneider, not Luongo—Will this saga ever end? GM Mike Gillis has butchered this situation since day one.

Seguin Not Long for Bean-Town?—Hard to believe, but the Kessel trade looks better and better each year, given that Seguin has not developed as expected.