As a result, the Rangers are attempting to remake their team from one that focuses on defense first, to one that focuses on an ultra aggressive forecheck and non-stop intensity.  Will the change work out?  Well, it may have an effect, but at the end of the day, it is the players on the ice that will make the biggest difference in any conceivable Rangers turnaround.

So, let’s examine the Rangers roster to see what we should expect in 2009/10.

The Rangers made a couple huge moves this summer, first by parting with Scott Gomez and second, by signing the dominant, but oft-injured, Marian Gaborik to a long-term deal.  The Rangers signed Gaborik to a five-year deal, worth $7.5 million per season.  So, they clearly think he is the man to take them to the next level.  While I agree with the team’s talent assessment, the organization better hope Gaborik does something to change his long injury history.  Over the past four seasons, Gaborik has played in 207 games total, or 52 games per season.  Considering his age, 27, and his past injury history, it seems unlikely that Gaborik will suddenly return to full health, but at $7.5 million per season, that is what the Rangers are banking on.

Surrounding Gaborik up front will be team leader Chris Drury.  Drury is making $8.0 million next season, so the team is expecting a rebound from last year’s 22 goal, 56 point performance.  Unfortunately for Rangers fans, Drury has only scored more than 30 goals in a season once before and is now 33 years old (hard to believe, isn’t it?), so expectations of return to his Buffalo form seem to be fairly unrealistic.

Well, we just accounted for $15.5 million of the Rangers’ cap and are not sure if the above duo will eclipse 40 goals total.  Worried Rangers fans?  You probably should be.  Now, there is hope up front for New York in youngster Brandon Dubinsky.  Dubinsky, just recently signed to a two-year deal, brings a lot of good qualities to the table.  He is big, has good net awareness and plays a solid two-way game.  He is a key player the Rangers should be building around and with his new deal signed, expect him to excel over the next few seasons.

Joining the aforementioned forwards in the top six will be Chris Higgins, Sean Avery and Vaclav Prospal.  Higgins, acquired from Montreal in the Scott Gomez deal, is a New York native who is ecstatic to be returning to his home state to play hockey.  The rugged winger kind of got lost in the fold in Montreal, but his grit and willingness to go to the net should be a welcome addition to the Rangers’ forward unit.

Along with Higgins, we find the man who gets more press than everyone not named Crosby or Ovechkin—Sean Avery.  Aside from my dislike of his consistent on-ice and off-ice antics, you cannot take away the effect he has when playing for the Broadway Blueshirts.  For whatever reason, Avery feels at home in NY and his play exhibits that.  He played just under 17:00 per game for the club during the regular season and tallied a respectable 12 points in 18 games.  Don’t expect Avery to maintain that scoring pace next season, but his worth to the team is in a variety of different areas—mainly energy and agitating the opponent.

The final addition to the team’s top-six was a late summer acquisition; Vaclav Prospal was bought out of his contract with Tampa Bay and found himself on the free agent market.  Whomever said Prospal and John Tortorella don’t get along must have been wrong, as you’d have to think Coach Tortorella had a direct connection to New York’s signing of his former player in Tampa Bay.  Prospal will bring the Rangers some much needed help on offense.  The Czech winger hasn’t missed more than two games in a season in eight years, so he is a perfect reliable complement to the team’s core injury prone forwards  On top of that, he has good hands that make up for his average (at best) skating ability.

Before moving onto the team’s depth forwards, we should talk about Ryan Callahan.  I don’t have him listed in the top-six because I see the team moving him around all season, but his contributions cannot be overlooked.  Callahan is an energizer bunny and his hitting ability (265 hits led the Rangers), speed, and penalty killing ability will be to the Rangers’ chances.  In fact, his penalty killing ability will be especially vital because the Rangers lost both Blair Betts and Fredrik Sjostrom this off-season—the team’s two top penalty killers in 2008/09. 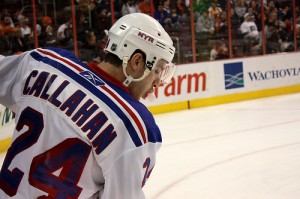 Ryan Callahan's energy is key to the Rangers' season. (Picture courtesy of Flickr)

We also cannot forget the signing of Ales Kotalik which should help the team’s second and third wing spots, as well as the team’s point-man play with the man advantage.  Kotalik is big, but doesn’t play that way; however, his shootout skills and power play versatility motivated the Rangers to bring him in for three years, at $3 million per season.

New York is also hoping that draft-day acquisition Brian Boyle, a huge center, will find his way on the team’s fourth line and gain the confidence he lacked in the Los Angeles system.  Along with Boyle, the team is hoping that Artem Anisimov can make the jump to the NHL after a successful AHL campaign in Hartford.

Some may have gripes about the Rangers’ forwards, but the defense contains a lot more promise in terms of young talent.  The Rangers are set on the back-end with Marc Staal anchored in as a top pairing defenseman for the foreseeable future.  The 22 year old Thunder Bay native has acquitted himself well to his NY surroundings through two seasons of play.  He is poised, skates extremely well for a player his size and is as positionally sound as they come.  His offensive skills aren’t tremendous but he still makes a very good first pass and has a very active stick in the defensive zone.  Staal is due for a big payday after this upcoming season.

Playing shotgun with Staal is the underrated Daniel Girardi.  Yes, it is true that a player can play in New York City and still be underrated.  Girardi took a while to develop but at 25 years old, entering his prime, he has gained some much needed confidence and his play demonstrates just that.  Girardi was second on the team in ice-time last season, and he plays on the penalty kill, power play and at even strength.  His ability to play in all situations combined with his physical play (207 hits led all Rangers defensemen) makes him a very important player on this team moving forward.  Sure there may be concern over his -14 last season (worst of all Rangers defensemen) but he has the necessary skill and awareness to improve on that.

After Staal and Girardi, the Rangers have two players, who most categorize as overpaid, in Wade Redden and Michal Rozsival.  Redden will make $8.0 million this season, so it is hard to argue that he is not overpaid.  Even so, Redden still logged 22:00+ minutes last season for the Blueshirts and was on the ice more than any other Rangers all season long.  His offensive skills are not what they were in Ottawa and he appears a step slower than he used to be, but he is still an efficient puck-mover who can move the puck from his own zone and is fairly strong at reading the play.

In Rozsival, the Rangers have a player entering the second year of a four-year, $20 million deal.  Is Rozsival worth $5 million per season against the salary cap?  Again, that is hard to argue, but he does bring some valuable assets to the table—he led the Rangers defensemen in ice-time per game (22:30), led the team’s defensemen in points (30) and power play points (14).  Unfortunately, Rozsival is inconsistent and the team was looking to move him this off-season.  With that salary, Glen Sather could not find someone to bite, so expect another season of Rozsival on Broadway.

After the team’s top four, the Rangers have a load of talented defensemen in the system—namely Bobby Saguinetti, Michael Del Zotto and Ryan McDonough but it is expected that defenseman Matt Gilroy will make an immediate impact on the team’s back-end. 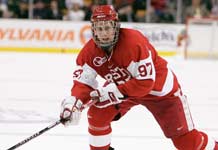 Did the Rangers hit the jackpot with Matt Gilroy? (Picture courtesy of tsn.ca)

Gilroy was signed in a much-heralded bidding war for his services late last spring, and ended up deciding on signing in NY for two years at $1.75 million per season.  By all accounts, Gilroy is worth it.  While some are sceptical of his NCAA production considering his age (25) versus younger competition, the consensus is that the talent to move the puck and read the game well is there.  The Rangers seem to have hit the jackpot with Gilroy—especially taking into account the fact that they gave nothing up, aside from money, to get him.

After the team’s top five, it looks like the sixth spot will be up for grabs.  The talent is there in terms of the aforementioned youngsters, however, Tortorella has stated he’d prefer the team pickup a veteran before the regular season begins, so this bears watching.

Any questions that I may have of the Rangers at forward or defense, do not exist when it comes to netminding.  Henrik Lundqvist, for all that is written about Martin Brodeur and Roberto Luongo, may be the best netminder in the world.  He has an Olympic Gold Medal on his mantel and almost single-handedly defeated the Capitals in the first round of the 2009 playoffs.  “The King” as he is known to Rangers fans posted a .916 save percentage last season (tied for 11th in the NHL), as well as a 2.43 G.A.A. (11th in the NHL). Simply stated, Lundqvist is a brilliant netminder with terrific positioning, flexibility and net awareness.  He is the team’s MVP and there is not much more to say. 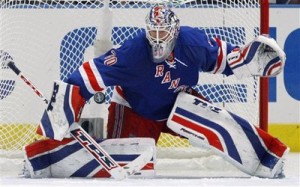 "The King" will decide how far the Rangers can go. (Picture courtesy of sportsnet.ca)

Backing up “The King” is the large framed Stephen Valiquette.  The 32 year old Toronto native stands in at 6”6 and leaves little of the net unfilled.  He isn’t the quickest of goaltenders but tries to play the angle and positions himself quite well.  His .907 save percentage is certainly suitable for a backup, especially with Lundqvist playing so many games.

If the team’s cap situation was not as dire as it appears, and the money was there to give long-term deals to Staal, Girardi and Dubinsky, I’d feel pretty good about the Rangers moving forward.  Alas, that is not the case and I feel as though the Rangers are a playoff team but not a legitimate Cup contender.

Ceiling: The team gels well under Tortorella, gets the usual exceptional netminding from Lundqvist and Gaborik stays healthy.  2nd in the Atlantic Division and 5th in the Eastern Conference.

Floor: Tortorella’s system doesn’t work with this group of forwards, Lundqvist wears down from too many shots against and the competition intra-division from Pittsburgh, Philadelphia and New Jersey proves too much.  4th in the Atlantic Division and 10th in the Eastern Conference.