Nature or Nurture: A Tale of Culture and Hockey 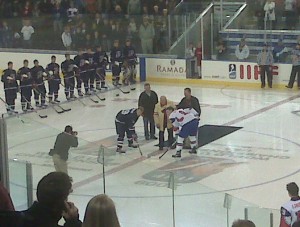 I recently had the opportunity to head down to Fargo (the long way thanks to overland flooding) to attend some World U-18 games with an acquaintance that had some passes. We saw the Canada-Germany game, followed by the USA-Norway game. As you would expect, both Canada and the US demolished their opponents. That was about the last similarity I saw between the two teams. What follows is a very specific comment on the differences in hockey culture between the two countries. As a disclaimer, I am Canadian and am not an America-hater (effectively barring me for life should I ever want to work at the CBC). My only purpose in writing this commentary is to point out how I think kids should carry themselves when they are an ambassador for their country and for hockey.

The Canadians, who after their traditional slow start entered the second period tied 1-1 with Germany, put on a display of both physical and finesse hockey for the final two periods. The players made crisp passes, finished their checks all over the ice and quietly celebrated goal after goal with a reserved nature not often found in 17 year old boys. Even the Canadian fans that had made the drive were reserved in their applause, with the odd mother letting out a whoop when her boy scored.

Team USA also started slow against the Norwegians, who despite being down 2-0 halfway through the game were at least putting up a fight (their goaltender was spectacular for stretches). The talent of the Americans finally wore them down and the floodgates opened and Team USA started filling the back of the net at an alarming rate. Unlike the Canadians, Team USA celebrated every goal like it was a Game 7 OT winner, mobbing the goal scorer, and often falling down in a pig-pile. I realize it must be terribly exciting representing your country in international play, but this team is together all year, and often travels to overseas competitions. They have all been there before. I am not one of those anti-celebration guys that jump on Ovechkin for his emotional responses, but he scores goals against the best players in the world.

The actual play was no better. Most of the team looked like they were concerned with getting their name on the score sheet, teammates be damned. One kid actually passed the puck to himself on breakout (off the boards) instead of making an outlet pass to an open man. Kids would drive the net 1 on 3 instead of moving the puck forward and would take shots from impossible angles. All of this stuff is really not a big deal, and may be more coaching than anything.

However, what I found particularly troubling was that when the US went up 6-0, the American players started chirping the Norwegians and pointing to the scoreboard. This stuff just shouldn’t happen at this level, especially when you consider that Team USA is comprised of some of the best talent in America (and they are supremely skilled) and the Norwegians are basically a good AAA team. If something inside you wants to taunt a team like that, you have a problem.

Lest you think the teams are only different on the ice, let me dispel that myth for you. In between games, I was a bystander on a few conversations my acquaintance had with some staffers at the arena. They told stories about how one guy had his son at the rink with him, a nine year old that loves hockey. He took his son downstairs to ask Team USA if he could be the stick boy at practice, only to be told that he wasn’t needed and they didn’t allow visitors in their room. Of course the boy was upset, but he made the same offer to Team Canada and they accepted. Not only could he work the practices, but he could help out at games. To me, it seems that if the USA Hockey program was intent on growing the game in America, they would have their players a little more open to fans and future players.

I realize I am cherry picking stories here, and that this is but one day in the life of two hockey teams. I do wonder though if this example is symptomatic of the minor hockey culture in the USA. In talking with friends who work in hockey in the United States, they describe the game south of the border as a “rich kids” sport. Due to the relative lack of arenas, ice time, and hockey programs, the parents tend to be more well off and accessible to driving little Timmy to and fro from games, practices etc. Stories about minor hockey coaches being bribed to give certain players preferential ice time are not uncommon. Does this type of environment breed needy players who feel they are owed something? Are they ever taught the niceties of the game? Is their upbringing the reason why the Americans are notorious for their boorish behaviour in international competition?

Sound off in the comments.

Urgency Emergency
‘Inside the NHL’ with Jeremy Roenick