Much has changed over the years for the Predators, but two men have remained constant amidst all the turnover and those two men are David Poile and Barry Trotz.  These two men have been in charge of the Predators since day one and their past work allows us a great insight into what to expect from the Predators team on the ice and the franchise off of it.

This season, like many in the Predators’ short history, sees the Predators going up against the odds.  Without as much money to spend as most teams, Poile generally builds from the inside and counts on his prospects to take the team to the next level.  In fact, the one uncharacteristic time Poile decided to load up (he added Forsberg, etc.) it backfired on him.  So, we should expect Poile to stick to his guns for the next couple seasons when he says he wants to see the team’s young talent (Colin Wilson, Chet Pickard, Jonathan Blum and Ryan Ellis) develop into the team’s new core.

The team’s current core is built around Jason Arnott and J.P. Dumont.  Both of these veterans bring more to the table than I believe many people realize.  Arnott is a leader who can win face-offs, go up against the other team’s top players and make room for himself with his size.  Along with Arnott, Dumont has found a home in Nashville (he’s signed for three more seasons at $4.0 million per).  The skilled winger isn’t overly physical, but is a great passer and has very strong puck awareness; however, he will need improve his scoring (only 16 goals last season) to pre-2008/09 levels, as the Predators cannot afford one of their top players underperforming if they want to make the playoffs. Jason Arnott had 33 goals for the Predators last season. (Picture courtesy of cbc.ca)

After the duo of Arnott and Dumont, the Predators will rely on the injury-prone Steve Sullivan to help carry the offensive load.  When healthy, there is no denying Steve Sullivan’s skills.  Simply, he is a wizard with the puck—easily the best puck handler on the team—and is a threat to breakaway or make a setup pass at all times.  Unfortunately for Nashville fans, Sullivan has a bad back and it is hit or miss whether he will even play half the season, never mind the entire season.

With the team’s top three scorers established, let’s examine the team’s other forwards.  We can start by taking a look at David Legwand.  The big and fast former Plymouth Whalers center never became the player many thought he’d become.  While the skill set is there, his lack of hockey sense has inhibited his ability to become an impact player in the game today.  As it stands, Legwand is a serviceable second line center—but at his price ($5.o million this season), the Predators are paying for more than they are receiving.

Lining up as one of the team’s top wingers is the talented Martin Erat.  Erat mainly flies beneath the radar but has good talent and speed.  He is a bigger player but doesn’t play that big, which sometimes hurts him (I’d like to see him be more aggressive).  That said, he brings a nice scoring touch to the wings and can play with any number of the team’s centers.  Erat’s 17 goal total from 2008/09 was a drop from his 23 goals the season before, so expect him to return to the 20 goal mark in 2009/10.

After Arnott, Dumont, Sullivan, Legwand and Erat the Predators have a scoring gap up front.  Will Michael Santorelli be the answer to the top six questions?  How about Patric Hornqvist?  I’m not sure David Poile & Company know the answer to those questions—so neither do I right now.  Although, it should be noted that the Predators have been floated around as being interested in Phil Kessel and Nikolai Zherdev, at times this summer.

While we don’t know who will fill the Predators’ last spot in the top six, what we do know is that Joel Ward had a breakthrough season for Nashville in 2008/09 and may have turned into the team’s best two-way forward.  Ward can check, score, kill penalties and play on the power play.  He was a terrific find and just the kind (cheap—$1.5 million) that Nashville needs to compete with the big boys.  Word has it Barry Trotz wants him anchoring the third line.

Along with Ward, the Predators have the rugged Jordin Tootoo in the mix.  Tootoo is a player that can sometimes aggravate fans, but it is fair to say that you’d rather play with the powerhouse than against him.

With the departures of Scott Nichol, Jed Ortmeyer and Radek Bonk, the Predators will miss some ruggedness, penalty killing and a good face-off presence.  To fill the voids left on the depth lines, the Predators are hoping players like Ryan Jones, the recently signed Marcel Goc, Wade Belak, Jerred Smithson and Ben Guite can fill-in admirably.

The Predators may have some holes up front, but they make up for those holes on the back-end.  Nashville boasts arguably the best young trio of defenseman in the NHL.  In Shea Weber, Ryan Suter and Dan Hamhuis, the Predators have a terrific balance of speed, skill and power.

Last season was a huge rebound season for Shea Weber.  Most were expecting a season like he had last year to come a season earlier—in 2007/08—but Weber incurred an early season injury in 07/08 and could never really regain his form.  Fast forward to last season and Weber was dominant.  He posted an impressive 53 points in 81 games, including 9 power play goals (he has arguably a top three NHL slap shot from the point) and finished +1 on a team with many negative players.  Additionally, Weber played over 4:00 minutes per game on the power play and led all Nashville defenseman in that category. 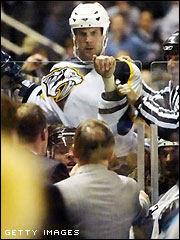 Along with Weber, the Predators have the well-known nephew of former NHLer Gary Suter manning the point.  Ryan Suter played a lot of minutes in all game situations last year.  Coach Trotz counted on him at even strength, on the penalty kill and on the power play.  This is a testament to Suter’s versatility and ability to play a responsible two-way game.

Joining the young duo on the back-end is “veteran” Dan Hamhuis.  The pending unrestricted free agent was second on the team in blocked shots last season (113) and fourth on the team in hits (133).  He focuses mainly on defense and plays a mean stay-at-home style game.  His 22:50 minutes per game ranked third behind Weber and Suter on the Predators.

After the team’s big-name top three, the Predators are going to have to fill the void left by the underrated and underappreciated Greg Zanon.  Zanon played big minutes and was a shot-blocking machine.  Luckily for Nashville, with Weber, Suter and Hamhuis eating up 20+ minutes per game, there aren’t that many minutes to go around.

Nevertheless, the time needs to be filled and, as John Glennon said on the IllegalCurve.com Radio Show, the Predators are hoping Kevin Klein can step up and fill-in for Zanon’s lost minutes.

The bottom two slots on defense may be filled by some of team’s young defense prospects; however, some Nashville fans expect a veteran to be brought in before the season begins—whether it be via trade or waivers.  If that does not happen, the youngsters Alexander Sulzer, Teemu Laakso and Cody Franson may be the favourites for the open spots.  Also, be sure to watch Jonathan Blum. While it is unlikely he’ll jump straight to the NHL out of junior, he will have a chance to prove his worth at training camp and has the skill-set to step up.

You never know who is going to be starting in net for the Predators year-to-year, but I’ll take my best shot predicting that Pekka Rinne finally ends that unpredictability.  Last season, Rinne seemingly came out of nowhere to be a Calder Trophy Candidate.  His .917 save percentage and seven shutouts made placed him in the upper-echelon of the league in both statistics.  Rinne’s size is a huge asset (no pun intended), as he makes it very difficult for shooters to find any space to aim at.  Further, he is 26 years old, in the prime of his career, and has a chance to play himself on the Finnish OIympic team. 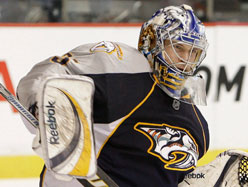 Behind Rinne, is Dan Ellis who was expected to become the team’s number one goaltender last season.  Unfortunately, Ellis struggled in his first real chance at primetime (well, with expectations fully on his back) and Rinne passed right by him.  Having said that, Ellis is still a good netminder, and while he had a poor season, he still posted a .900 save percentage; remember only two years ago he posted an extremely impressive .924 save percentage.

The Predators are well-off in net, especially considering they have Chet Pickard in the system.

Ceiling: The Predators have a fairly injury free season, don’t go through the massive scoring slump they did in 2008/09 and win a lot of one-goal games.  3rd in Central and 8th in Conference.

Floor: The Predators cannot find the back of the net on a consistent basis, don’t get above average goaltending and feel the difficult intra division schedule.  5th in Central and 12th in Western Conference.