The New Jersey Devils enter the 2009’10 season with a new (but familiar) head coach in Jacques Lemaire, the same phenomenal world-class goaltender in Martin Brodeur and a boatload of prospects who are trying to make a team that relied too much on their veteran players last year.

While the New Jersey Devils enjoyed plenty of regular season success during Brent Sutter’s two-year stint as head coach, the team’s two consecutive first round exits (including last year’s vomit-inducing last minute collapse against the Carolina Hurricanes) have become annoying and simply unacceptable to President Lou Lamoriello and the rest of the Devils management so this year the pressure to win it all is only higher.

Because the Devils have lost a good chunk of their 2003 Stanley Cup-winning team core, and because the immortal Martin Brodeur is seemingly in the twilight of his career, the time is now for the team from the Garden State to win Cup number four.

The Devils scoring attack is clearly led by super-slick left winger Zach Parise, who had a career year last year with 94 points (45 goals, 49 assists).  Parise, who has improved incrementally since breaking into the league as a rookie during the 2005’06 season, can now be labelled a bonafide Top 10 forward in this league after continually proving that he has the ability to single-handedly change the outcome of a game.  Parise has enjoyed great chemistry over the last three seasons playing with center Travis Zajac, although former head coach Brent Sutter lined Parise up with Patrik Elias at times when the Czech forward wasn’t playing the wing.  Zajac has quietly become an excellent two-way forward who can log a surprisingly high amount of ice time (18:38 last year).  Zajac is tenacious and physical (he’ll go into the corners and work the boards for Parise) and reads off of Parise well. You would assume that Captain Jamie Langenbrunner would start the season (and stay there) as the third cog on the “ZZPops” line but Langy is so versatile that he often ends up playing second and third line duties to stretch out the team’s strengths. 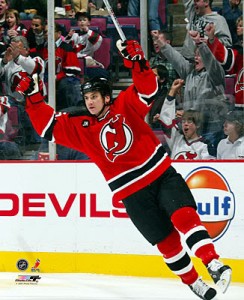 Speaking of Langenbrunner (and I may very well be biased here as a fan of the Devils for the past decade), his play last year was spectacular and a huge reason why the Devils were able to keep it together after a horrendous start. Langenbrunner had 69 points last year and does the little things to make his teammates better.  Always a consummate professional, Langenbrunner has thrived as the team’s captain and may be the hardest working player in the league with the exception of Rod Brind’Amour.

Future Hall-of-Famer Brendan Shanahan has been lining up with Parise and Zajac early on in training camp and may see significant time on the top line and could even stick there if his combination of leadership/toughness works out with the slippery offensive skills of Parise and Zajac.

Looking at the Devils secondary forward lines, the team is going to need to employ at least two youngsters, especially with the recent injury to Devils stalwart Patrik Elias.  Potentially solid-but-inconsistent Brian Rolston and Dainius Zubrus will man the wings on the team’s second line, but it is unclear who their center will be.  Will 19-year-old Patrice Cormier make the Devils and be given an opportunity on the team’s second line? It seems like that may be asking a little too much of a talented forward who spent last season with the Rimouski Oceanic of the Quebec Major Junior Hockey League who has no professional hockey experience.  However, Cormier has impressed the Devils coaching staff with his work ethic and physical play and has been pencilled in by many experts as making the Devils this season.

With the departures of Brian Gionta, John Madden and Bobby Holik, the Devils are suddenly looking very young on forward.  Madden and Holik were staples on the team’s third and fourth lines last year (and over parts of the last decade).

New Jersey’s third line will feature veteran Jay Pandolfo as usual with rapidly-developing tough guy/scorer David Clarkson (who had a solid 32 point campaign last season) but with no Madden.  The Devils feel that Rod Pelley is ready to step into an everyday checking role.

The Devils fourth line will almost certainly feature one scoring prospect, whether that is Swedish winger Nicklas Bergfors (who has patiently bided his time playing for Lowell of the American Hockey League), Alexander Vasyunov or Matt Halischuk.

The Devils made very few moves on their back-end during the offseason, bringing in only Cory Murphy, who played for the Tampa Bay Lightning and Florida Panthers last year.  The Devils have a solid group of intelligent defensemen with underrated speed and puckmoving abilities.  Swedish-born defenseman Johnny Oduya has a new multi-year contract with New Jersey and is part of the team’s top defensive pairing along with American college boy Paul Martin. Martin and Oduya have both improved their defensive game over the past two years and play to their strengths, which is positioning and speed.  The duo is not dominating offensively but leads the team by example.

The team’s second unit of Bryce Salvador and Colin White is a shutdown tandem and makes playing in New Jersey very uncomfortable for visiting Eastern Conference forwards. Salvador has been an especially nice fit in Jersey because he has tremendous lateral skating abilities and is an extremely efficient body checker.  White, who graduated from the University of Scott Stevens, is a solid big body presence who rarely makes mistakes in his own zone and who has the ability to chip in the odd goal once in awhile.

The Devils defensive corps is rounded out by Mike Mottau and Andy Greene.  Cory Murphy, who has shown that he can score at the European pro level, will be given a shot to provide an adrenaline boost on the team’s power play.

Martin Brodeur. And Yann Dannis? You would think that after only playing in 31 games last season and struggling towards the end of the first round of the playoffs last season, that everyone in New Jersey would be talking about the decline of the great Quebecois goaltender.

Martin Brodeur will play 70+ games for the Devils this season and will be the Number-1 goalie for the Canadian Olympic Team in Vancouver.

Oh yeah, and newcomer Yann Danis will be a competent back-up for Marty, replacing Scott Clemmensen. He just won’t play that much.

Ceiling: The Devils can finish as high as second in the Atlantic Division and fourth in the Eastern Conference if they get secondary scoring from their younger players and Marty B. stays healthy all year.

Floor: The Devils may finish as low as 4th in the Atlantic Division and 8th in the Eastern Conference if the team team struggles defensively and goes through a prolonged mid-season slump.

Nashville Predators 2009-10 Season Preview
Which teams are going to be the best and worst at even strength?