– C Michael Spacek – signed to an ATO Friday morning – makes his pro debut. A 4th round pick in 2015, Spacek is a high-end playmaker who scored 30G, 55A in 59GP for Red Deer (WHL) this season, and led the WHL in playoff scoring (at the time of this writing) with 12 points in 7 games. He also represented the Czech Republic in the World Junior Championships for the past three years.

– Jamie Phillips gets the start in net, with Eric Comrie – fresh off his first NHL win – backing up 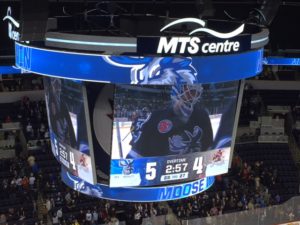 Moose Goal (1): Jack Roslovic was deep in the zone and dropped it to Chased De Leo, who cut to his left and was stopped from the slot, but De Leo collected his own rebound and put it home for his 14th of the season. His first goal since March 17.

Moose Goal (2): Dan DeSalvo took a cross-ice feed from Elgin Pearce and ripped a wrist shot low blocker for his 17th of the year. 2-0 Moose just 5 minutes into the first period.

Roadrunners Goal (1): After a Peter Stoykewych penalty, Jamie McBain beat a screened Jamie Phillips on a one-timer from the point.

Roadrunners Goal (2): AHL veteran Chris Mueller came streaking down the right side – two-on-one – and beat Jamie Phillips high blocker side to tie the game at 2.

Moose Goal (3): Michael Spacek dropped the puck to Kevin Czuczman at the blueline, and his shot went off a roadrunner’s leg and in. Spacek’s first career AHL point.

Moose Goal (4): A nice forecheck by Jansen Harkins and a good feed out front by J.C Lipon set up Dan DeSalvo in the slot; the 5’7 scorer held the puck patiently and snapped a low wrister over the right pad. Starting goaltender Adin Hill was pulled. Harkins gathered his 4th point in 7 AHL games, and first of this season.

Roadrunners Goal (3): A Jamie McBain shot from the point gave Phillips some trouble, and Chris Mueller literally poked the rebound past him to get the Roadrunners within 1.

Roadrunners Goal (4): With 1:41 left in the third, the Moose were on the pk and down two men; in total controlof the play, Chris Mueller made a cross-crease feed to Joe Whitney, leaving the undersized sniper with an empty net, which he finished easily to tie the game.

Moose Goal (5): Brenden Kichton – goalless in the first 59 games of the season – saw an opening in 3-on-3 OT and comes down the left side of the ice on his backhand; he lifted a shot high off the left post, which came back off the goaltender and banked in for his first of the year, and the OT winner. A feel good story to  be sure.

Michael Spacek: In his first AHL game, Spacek was impressive right off the bat. He picked up an assist in the first period and had the puck on his stick as much as anyone on the ice. He was strong on his feet, dropping a player who was trying to knock him down, and he also checked another player to the ice playing defence in his own zone – both unexpected given his modest size (5’11, 190). His skill set is pretty close to complete – he has incredibly quick hands and great vision/hockey sense. He prefers to pass than shoot, but his shot is underrated. His skating is also good – quick feed, and a fluid stride. His size is his biggest limitation – he’ll need to gain as much strength as he can over the coming years in order to compete against the best in the world.

Jansen Harkins: He wasn’t too noticeable early on, but he got into the game off a forecheck in the second period which led to the 4th Moose goal. He’s a good playmaker with good hockey sense and a great work ethic. He needs to work on his skating and get stronger, but with the surfeit of young talent up front for the Jets org, he has plenty of time to do just that.

Jamie Phillips: He saved 23 of 27 shots tonight, and was just good enough for them to win. He had absolutely no chance on goals 1+4, and was beaten by a great shot on goal 2, though he may have been slightly off his angle. The third goal is one he’d probably liked to have back, as the rebound ate him up a bit. With Comrie away for most of the week, it was a nice opportunity for him to get consecutive starts and enter the mindset of an every-day starter in pro hockey.

Pascal Vincent discusses the result, the debuts of Spacek and Harkins, and Brenden Kichton getting the OT winner

Jansen Harkins talks about his excitement of turning pro

The Moose play their final home game of the season Sunday afternoon at 2 pm versus the Tucson Roadrunners. It should be a packed house and a nice send-off for Moose fans.