The Moose came into tonight’s game having won two straight against the Senators and with a banged up blueline knew they’d have ten days off until their next series. 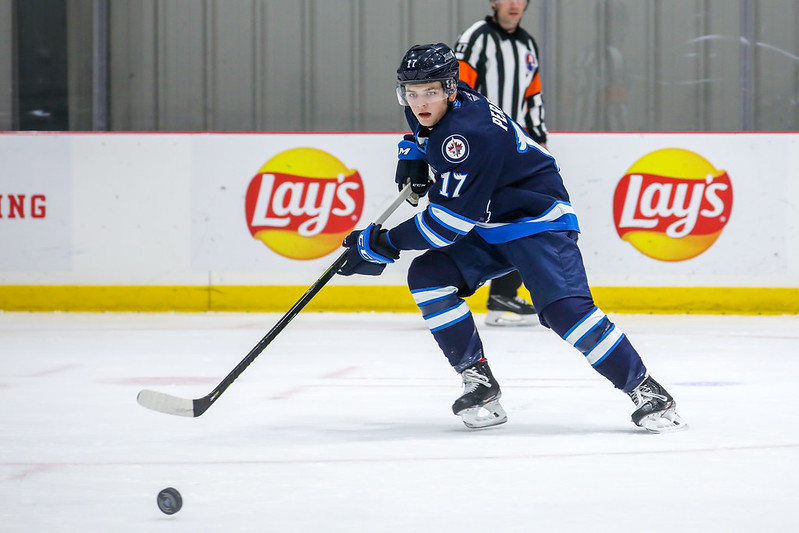 It was actually a close game after 40 minutes but Joseph LaBate took seven minutes of penalties (five for boarding, two for roughing) to start the 3rd which allowed the Moose to blow open a 2-1 contest. They outshot the visitors 21-7 in the finale frame and rolled with three more goals to ice the game 5-1.

Jets 2020 1st rounder Cole Perfetti had his first three point game as a pro, his first multi goal game and his third straight multi point game as he continues to really show that he has adjusted to the pro game. (See his two goals here: Goal, Goal)

After going nine games without a point leading scorer Nathan Todd picked up a goal last game and added three assists in tonight’s win.  Just an amazing season for him considering he had one point in 27 career AHL games coming into the 2021 season and now had 20 points (8g 12A) in 24 games for Manitoba.

Jets 2017 3rd rounder Johnny Kovacevic played 38 minutes last game for the shorthanded Moose and he continued to have a significant presence throughout this game. The entire series against the Senators seemed to be a really big one for him.

Another game, another goal for Jeff Malott who leads the Moose with 11 goals on the season.  He added an assist in the win as well.

Goalie Mikhail Berdin showed off why he is one of the best making passes as he sprung Cole Maier at the Senators blueline which ended up resulting in a pass to Bobby Lynch for the game-winning goal.

The Moose are off for the next few days and won’t play their next series until the 22nd.