Recapping the Moose come from behind win.

In their second game of the back-to-back series, the Moose took on the San Antonio Rampage. After on Wednesday night – and scoring a season high 5 goals – the Moose looked to carry the positive momentum into the last game of their home stand before the brief Christmas break. 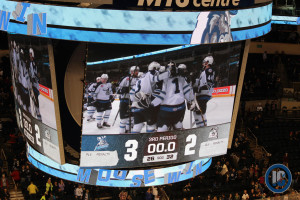 1. After Julian Melchiori and Jay Harrison each took tripping penalties, sending the Ramage on a 5-on-3 powerplay, Mikko Rantanen made them pay. After just 18 seconds of playing down two men, Rantanen unleashed a wicked one-timer from the right faceoff dot, putting San Antonio up 1-0. They held the lead through the first period.

2. Early in the second, Patrice Cormier was sprung on a short-handed breakaway, and made a nice move going backhand-forehand, but with Calvin Pickard at his mercy, Cormier wasn’t able to poke the puck into the half-empty net.

3. Partway through the second, Adam Lowry took a penalty after the whistle; on the ensuing powerplay, Nikita Zadorov fired a low one-timer from the point, which beat a screened Comrie to put the Rampage up 2-0.

4. There was a ton of nastiness out there tonight, with 3 fights through just the first two periods, including good tilts from Kramer (resident enforcer), Brassard, and Harrison – who stood up for Nic Petan after he took a big hit from Daniel Maggio.

5. At the end of the second, Brenden Kichton made a tremendous head’s up play, spotting a wide-open Patrice Cormier at the side of the net. Kichton drew back his stick for a slapshot, but then made a slap-pass to Cormier, who tapped it into the empty net. The Moose were down 2-1 after 2.

6. Seven minutes into the third, with the Moose on the pp, John Albert fired a slap shot from the top of the left circle, which beat a screened Calvin Pickard, tying the game at 2.

7. Under a minute later, Scott Kosmachuk came in two-on-one and made a wonderful pass through a defender’s legs to Ryan Olsen, who was waiting for the back-door feed. Olsen slid it into the empty net, giving the Moose a 3-2 lead.

8. Strong play from Eric Comrie, and several blocked shots from Olsen, Lowry, and Brassard in the late stages of the game helped the home team preserve a 3-2 win.

Brenden Kichton – He had 2 assists on the night, including the pass to Cormier which turned things around for his club. He’s the key ingredient on the powerplay, and one of the key offensive contributors overall on this team. He now has 13 points on the year, tied for the team lead with Lipon and de Leo. (Though he’s played the fewest games of those 3.)

Eric Comrie – While Comrie wasn’t forced to make any highlight reel saves, he was incredibly solid throughout, with 30 saves on 32 shots. More importantly, he kept the Moose in it when they were down 2-0, making several timely saves. While many young goalies tend to rely on athleticism, his positioning has been particularly impressive all season long.

Chase de Leo / Scott Kosmachuk – While de Leo didn’t factor in on the scoresheet, he had a lot of jump all night and created several good chances with his speed. He continually finds a way to get into good spots on the ice. Kosmachuk meanwhile also showed a lot of jump, particularly late in the game, and made a gorgeous pass to Ryan Olsen on the game winning goal. There aren’t many players who can make that play, but Kosmachuk is one who can, and did. (He made a similar beautiful backhand feed to Austen Brassard several weeks ago).

J.C Lipon sat out his 4th straight game, and is likely to be out another week. Thomas Raffl also remains out with a broken jaw.