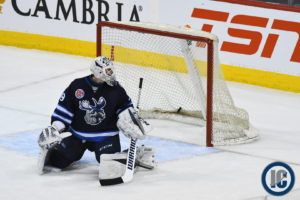 A)  Cameron Schilling scored his fifth goal of the season to tie Sami Niku for team lead among D men.  They are tied for fourth among all D in the AHL.

B) Mason Appleton picked up an assist on the game tying goal to move into a tie for first in AHL rookie scoring.  He now has 12 goals and 22 assists for 34 points in 36 games.

This won’t be an easy game to describe.  The home side was flat almost from the outset.  The Griffins scored early (1:59 into the 1st) and held a 7-2 shot edge.  Eventually the Moose began to push back but it just didn’t feel like they were ready to go from the puck drop.  Then former Jets forward Eric Tangradi intercepted a Cameron Schilling pass across in the Grand Rapids zone late in the 1st and went on a breakaway which ended with him beating Michael Hutchinson to give his side a 2-0 edge after 20 minutes.

The middle frame wasn’t any better as the home side failed to really create and the Griffins seemed content to sit back on their two goal edge.  The best chance came at the end of the period when Darren Kramer worked hard to get to a puck and fired it across to Jimmy Lodge who put it on Tom McCollum.  The puck sat behind the Griffins netminder but with no Moose in sight the visiting team shot the puck down the ice.

It looked like the final period would be a continuation of the middle frame but coach Vincent went back to his coaching well and pulled Michael Hutchinson with 3:30 left in the 3rd.  And with Buddy Robinson causing havoc in front of the net a Cameron Schilling shot from the point beat Tom McCollum for the first time in the game and it was a 2-1 contest.  36 seconds later, with the Moose simplifying their game, Nic Petan deflected home a Patrice Cormier shot and the game was, somewhat improbably, tied.

OT would be required.  The visitors deservedly left the building with two points when a blast from Filip Hronek ends up going off Cameron Schilling’s stick and up and over Michael Huthcinson for the 3-2 win.  Moose get a point in a game they probably didn’t deserve it.

Wednesday, January 10th will be a re-match against the Griffins. Puck drop is at 7 pm.