A recap of the Moose game against the Rampage.

The Moose received Sami Niku, Cam Schilling back from the Jets who are on their Player & All-Star break this week.  The team also had Mason Appleton reassigned but this was simply a paper transaction I am told and he won’t be with Manitoba.

Cam Schilling returns to the lineup while Jacob Cederholm comes out on the backend.  The Moose also swapped forward Alexis D’Aoust in for Kristian Reichel.

– Chris Collins scores his first ever AHL goal to open the scoring in his second ever game on a nice deflection.
– Collins was signed to a PTO by Manitoba the other day and was the leading scorer in the ECHL.
– And Collins may have the best GIF game of the entire team with his slappin da bass

– Logan Stanley has a BIG shot and he blasted one home on the power play to make it 2-0 for the Moose;
– This marked Stanley’s third goal in his last five games;

– Rampage really came out hard in the middle frame getting the first 6 shots of the period;
– The Moose did do a good job of allowing Eric Comrie to see the first shots and limit 2nd & 3rd chances for SA;
– Marko Dano made some nice moves and Cam Schilling buried the loose puck to make it a 3-0 game;
– JC Lipon drew a penalty shortly thereafter and Tucker Poolman made it a 4-0 game on the PP;
– Moose PP was 2/2 to this point in the game;
– A late power play for San Antonio allowed them to finally beat Comrie to make it a 4-1 game;
– The Rampage held a 10-6 shot edge in the middle frame but the Moose outscore them 2-1, for a 4-1 lead after 40.

– With four Moose goals on 13 shots the Rampage made a goalie switch to start the 3rd period;
– A fairly ho-hum final frame as the Rampage outshot the Moose by a 3:1 margin but nothing too dangerous;
– One of the few times the Moose were unable to clear the front of the net late in the 3rd San Antonio got one back
– But they couldn’t get any closer and the Moose held on for the 4-2 win. 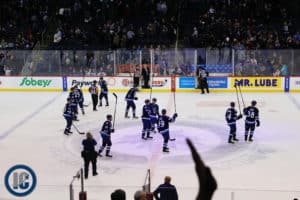 The Moose hit the 40 game mark improving to 19-18-2-1 and within striking distance of a playoff spot thanks to this afternoon’s 4-2 win over the Rampage. They went 5-0-0-1 on this six-game homestand.

The Moose are 6-0-0-1 in last seven games and are 8-2-0-1 in last eleven games since Christmas break. Players have been talking to me about the reset they internally hit on this season and it appears to have worked.

The Moose may practice on Monday ahead of their six-game road trip which starts Wednesday in Grand Rapids.  Be sure to start your day with the AM papers at 7 am on illegalcurve.com.