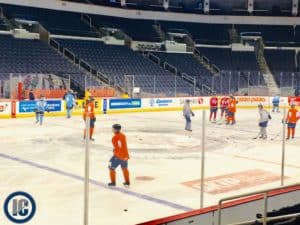 The Moose hit the ice today following the conclusion of their six-game homestand here in Winnipeg.  When the homestand began the Moose found themselves at the bottom of the Central Division standings looking up but the good news for the AHL squad is by virtue of going 5-0-0-1 at home they have put themselves back into the playoff conversation.  They will now head out for six-games on the road which will be split in half by the AHL All-Star break which takes place January 27-28 in Springfield, Mass.

CCM/AHL Player of the Week:

While Eric Comrie usually deflects invidividual recognition by saying his team is a big part of his success (today when we spoke it was no different saying “For a goalie it is more of a team award”) he was honoured by the league by being named the AHL Player of the Week.  From the AHL Release:

He posted a 4-0-0 record last week, leading AHL goaltenders in wins, saves (131) and minutes played (244). The Edmonton, Alta. native allowed just seven goals, while featuring a 1.72 goals-against average and a 0.949 save percentage in his four starts.

Coach Vincent provided updates on some of his injured players who are either wearing yellow non-contact jerseys or weren’t on the ice.

With respect to defenceman Luke Green who last played December 7th in Stockton and was seen last week practicing with the team in a yellow non-contact uniform, “Good days, some not so good days.  It is still inconsistent for us to put him in a regular practice.  So he’s skating and we’re evaluating him on a daily basis.  I don’t know, if he goes six or seven good days in a row he might be part of a regular practice and it might go really quick from there or it might take longer than that.  Its really one of those injuries that we don’t know really the deadline.”  He added that Green would not be on the road trip.

Tucker Poolman, who played both games this weekend, wasn’t on the ice for today’s practice and I was curious if that was a maintenance issue or if there was something that potentially occurred in yesterday afternoon’s game.  “Just being smart about saving his energy.  He played some games after being injured.  We pushed him hard.  Today was a safe decision to keep him off the ice.

Another player wearing yellow who participated in today’s practice is veteran Ryan White.  The Brandon born forward is in the same situation according to his coach as Luke Green.

Last up was Jimmy Oligny who the team acquired in a trade and has really smoothly become a member of the Moose squad in the six games he’s played for Manitoba.  He didn’t play either game this weekend against the Rampage and according to the Moose head coach he required non hockey related surgery and will be out a couple of weeks.

The Moose will travel on Tuesday to Michigan where they kick off the road trip in Grand Rapids against the Griffins.  Puck drop is at 6 pm.