Moose gored by Icehogs in 4-2 loss

The Moose took on the Rockford Ice Hogs in a potential playoff matchup – if the AHL season were to have ended today, the two would be facing off in the first round. The Moose were quite undermanned up front in this game, missing Nic Petan, Brendan Lemieux and Mike Sgarbossa to injury, and of course Jack Roslovic, who is still on recall with the Jets despite not being in the NHL lineup. They were also without Julian Melchiori on the backend, along with Eric Comrie in goal (NHL recall). Jamie Phillips got the start in goal.

After a Cam MacLise penalty put the Moose down a man, former NHL’er Cody Franson took a nice cross-ice feed and buried a one-timer past Phillips to put the Ice Hogs up 1-0. Just under two minutes later, the Hogs struck again, as a point shot through traffic looked to be deflected in the slot by former Coyotes first round pick, Henrik Samuelsson, putting the Moose down by two just 11 minutes into the first period. 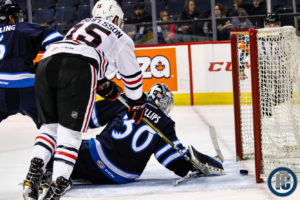 In addition to being outscored, the Moose were also outplayed early in the first, and were down 8-3 in shots. They fought back and got a few good opportunities later in the first, but weren’t able to make up any ground, as they went to intermission down by 2.

The Ice Hogs hit a pair of posts in the second, including one off a giveaway by Sami Niku which created a 2-on-0 against. The Moose stayed in the game based on this good fortune, along with an impressive play by Mason Appleton, who scored a beautiful goal, busting over the blueline 1-on-1 with a defender, cutting wide and roofing a wrist shot short side on Collin Delia to get the Moose within 1. However, the comeback was short-lived: after Patrice Cormier’s cross-checking penalty put the Moose down a man, Tyler Sikura collected a rebound off a point shot and potted his team-leading 18th of the season to give the Ice Hogs a 3-1 lead.

After Elgin Pearce drew a tripping call, the Moose had a chance to narrow the lead to 1, highlighted by an excellent chance in the slot off the stick of Michael Spacek. They were unable to convert, and shortly thereafter, the Hogs came down on a 3-on-2, and a shot from the slot took a funny bounce, potentially off of a defender, and past Phillips to give the Ice Hogs a commanding 4-1 lead. The Moose made a game of it late in the third, as the puck bounced into the slot of the skate of Brett Welychka and Jan Kostalek pounced, scoring his 5th of the season low blocker to narrow the lead to 4-2. With Phillips off in favour of the extra attacker in the final minutes, the Moose had great pressure in the offensive zone, and a few chances in tight, but they weren’t able to make up any more ground.

-Mason Appleton was perhaps the lone bright spot in a one-sided game. His individual effort in the second gave the club a hope for a time, and showed off the combination of speed, puck skill, and finish which very few AHL players with his size (6’2) possess. He continues to lead all Moose in scoring, now with 60 points on the season – the most points by a rookie in team history. He also leads all AHL rookies in scoring.

-Elusive defenceman, Sami Niku had a forgettable game tonight. With the team down by two the majority of the game, and missing so many dangerous forwards, he tried to do too much, forcing plays that weren’t there. For instance, he made a bad giveaway in the second which created a 2-on-0 against and nearly led to a goal (post). He also frustrated in other ways in this game, including an early chance from the slot, but he fired a slap shot from in tight right into the goaltenders glove, and left the ice a bit disillusioned. Still, he sits second in the AHL in scoring among defenders, and is having an impressive rookie campaign.

-Like Niku, Michael Spacek had a tough time out there tonight. He had a few chances late in the game, but for the first 40 minutes, the most memorable he made was a giveaway after he lost an edge and fell down. He sits 9th in team scoring, but continues to lead the club with 10 powerplay goals.

“We gotta put that game behind us, learn from it, and get two points on Wednesday” – #MBMoose forward Mason Appleton after the 4-2 loss to the IceHogs #GoMooseGo

For more post-game interviews and highlights, head to: https://t.co/nkd4J5YAWT pic.twitter.com/RIwTv3tQMo

For more post-game interviews and highlights, head to: https://t.co/nkd4J5YAWT pic.twitter.com/8wXUTO2UiQ

March 28th at Bell-MTS Place, again versus the Ice Hogs at 7pm.